Hey everyone, it’s Ali LePere back again to show you how I do lettering based on one of my favorite summertime activities! Let’s get to it! 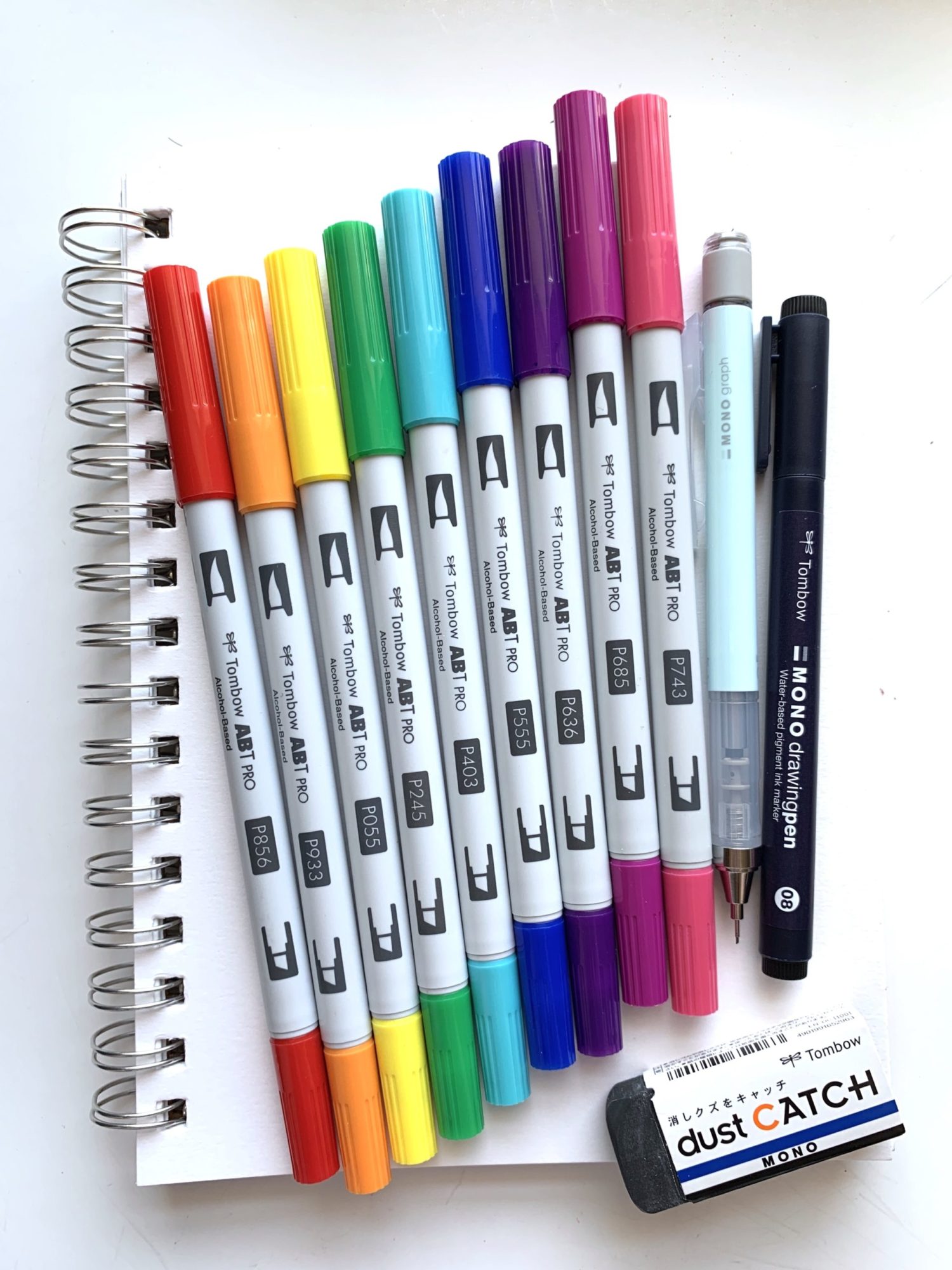 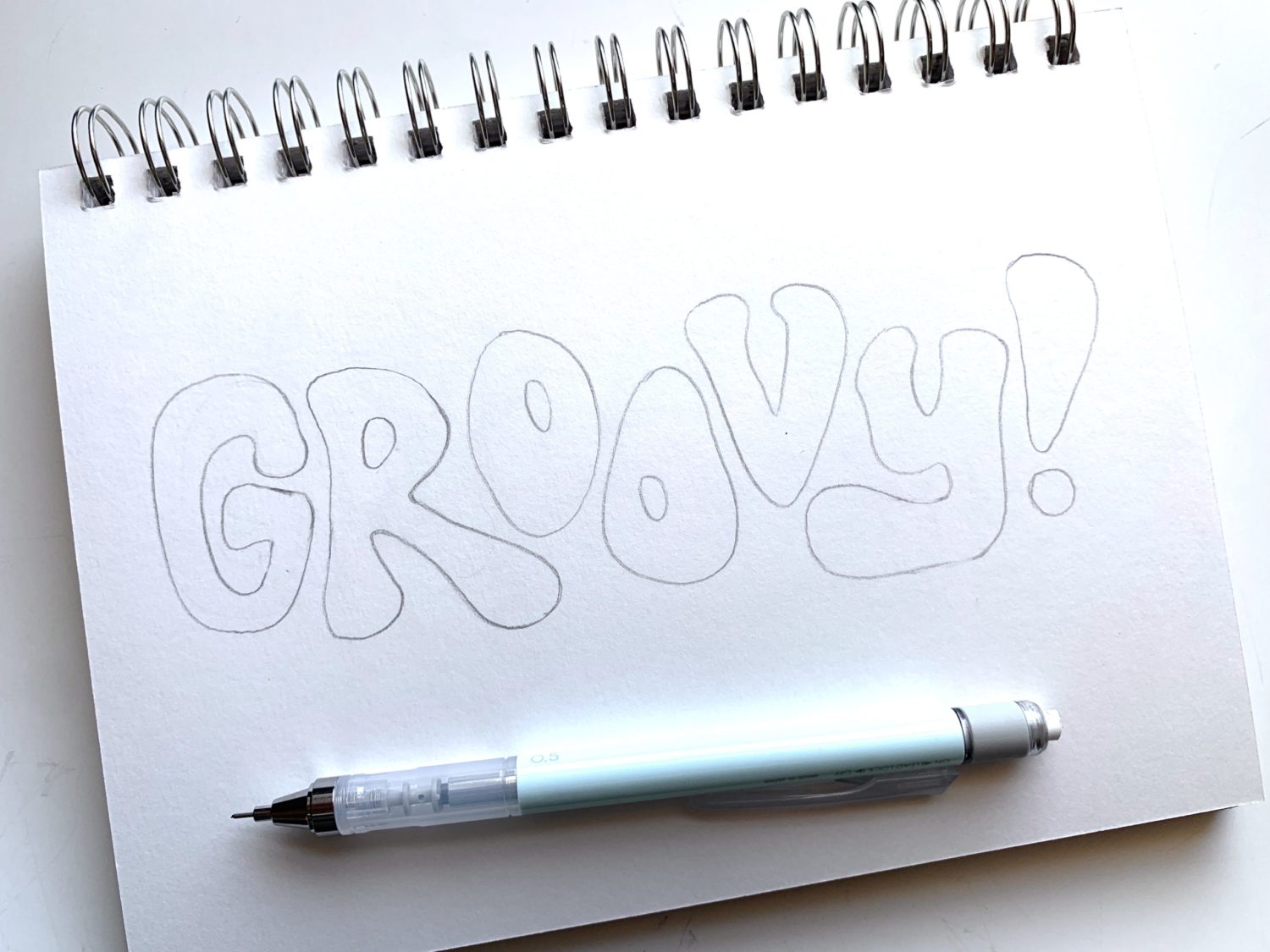 Using the MONO Graph Mechanical Pencil, I sketched out my chosen word. Picking the word ‘groovy’ in a psychedelic style seemed like the obvious choice for this tie-dye style! 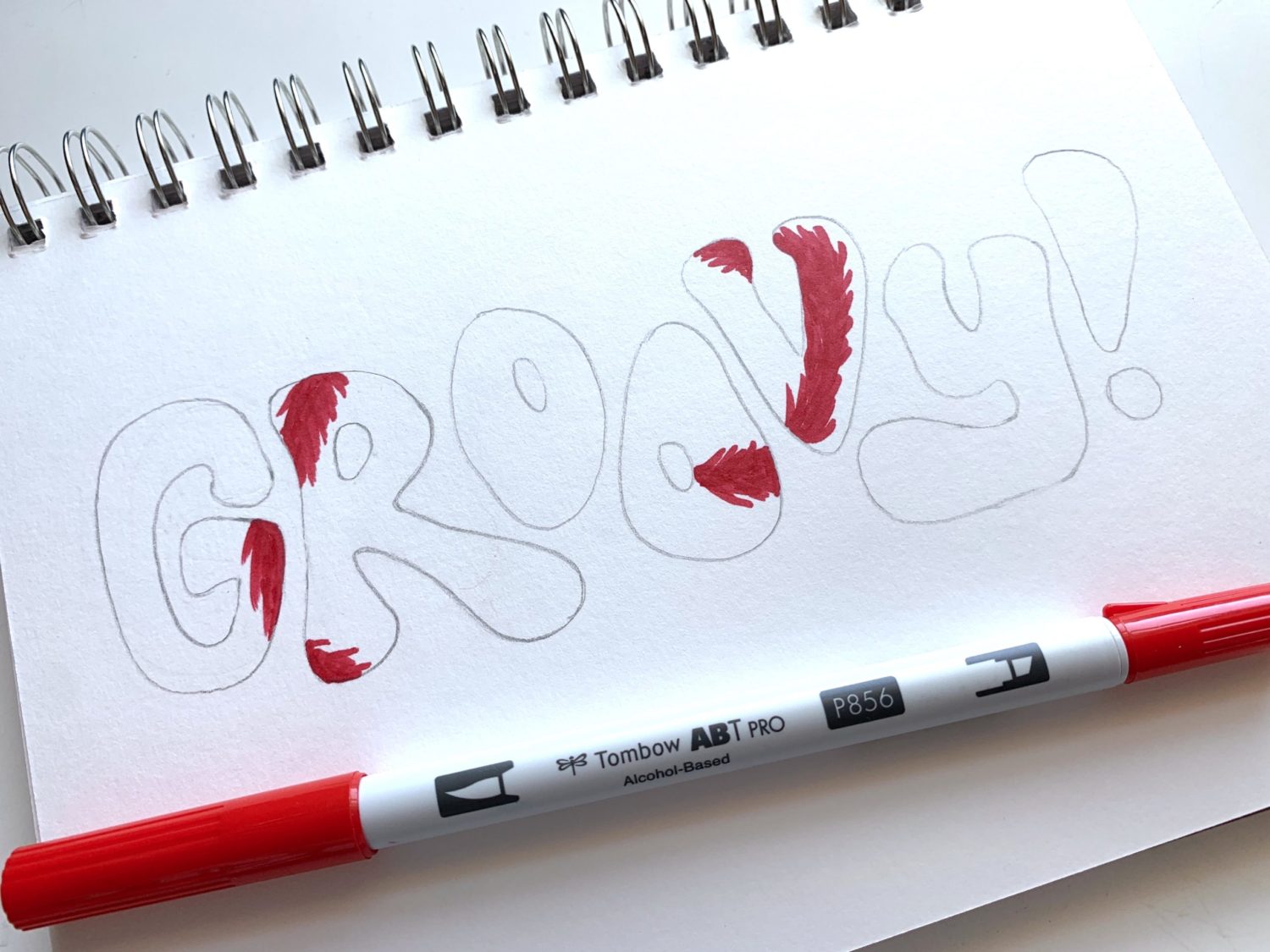 I started by visualizing a large swirl shaped line covering the whole paper. With the red ABT PRO Alcohol-Based Marker (856), I colored over that imaginary swirl line. Since no tie-dye project is perfectly blended, I’m intentionally messy with my brush strokes. The line of red ink is jagged and imperfect, just like real life tie dye. I just have to try and stay in the lines!

Using a pencil to sketch out the swirl can help if you’re just starting with this lettering style! 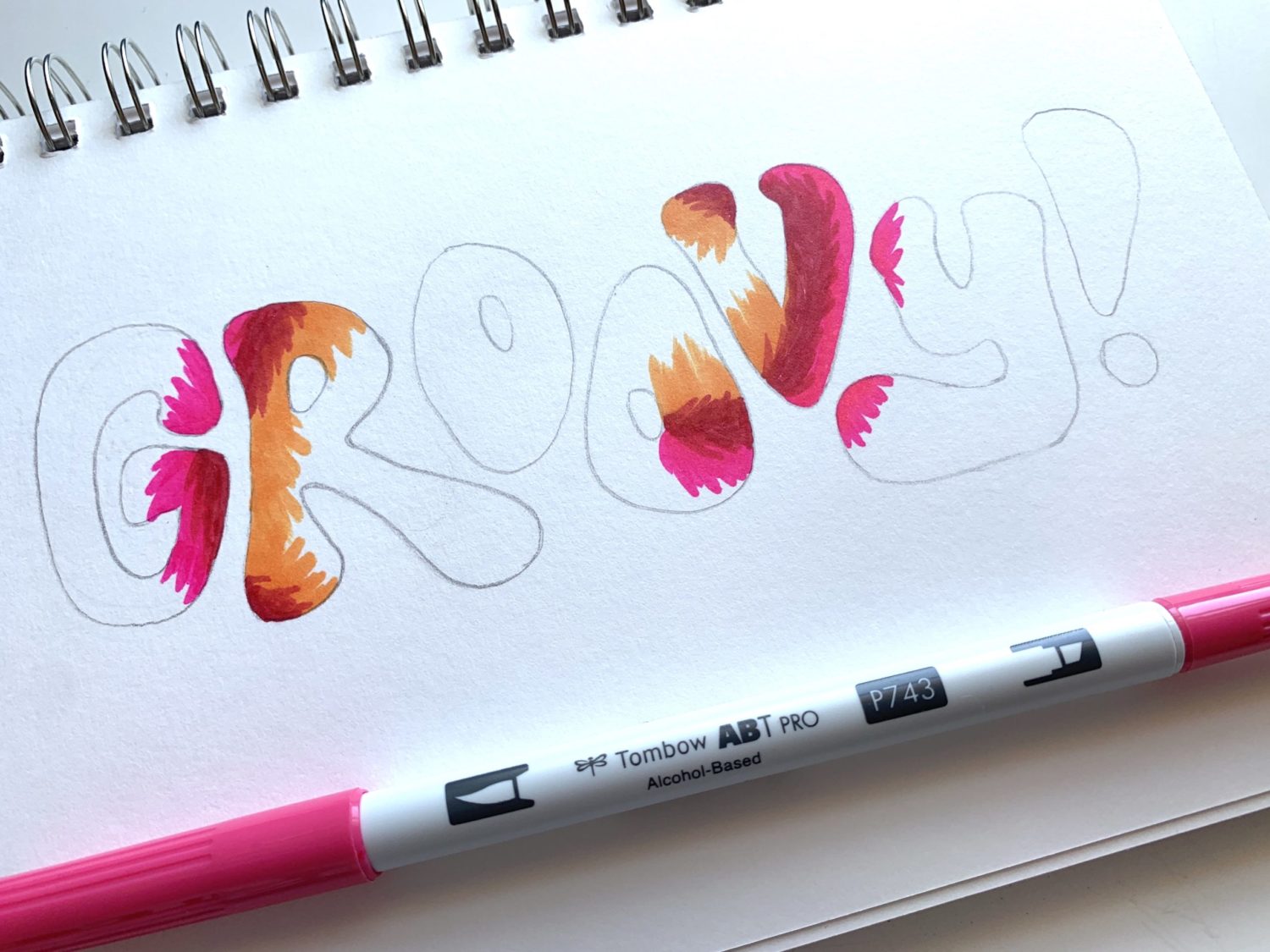 Next, I will be coloring on either side of the red ink using the ABT PRO P743 and P933. Each of the new colors should be roughly the same width as the red and slightly overlap the red ink. I used the same jagged and imperfect brushstrokes. I continued adding colors, going in rainbow and reverse rainbow order until I ran out of markers. 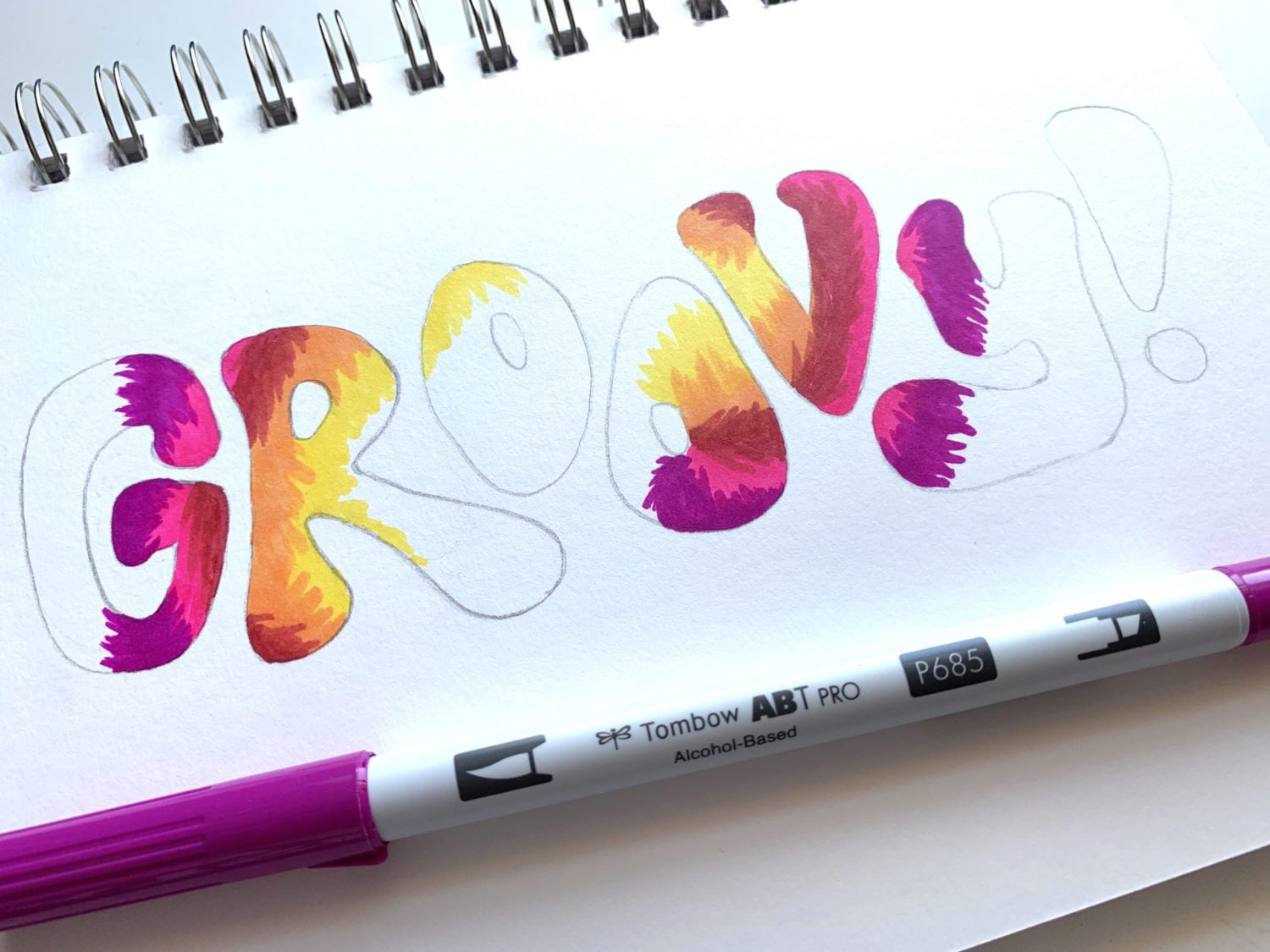 Then, I laid down ABT PRO P245 next to the yellow and ABTPRO P636 next to the magenta color. 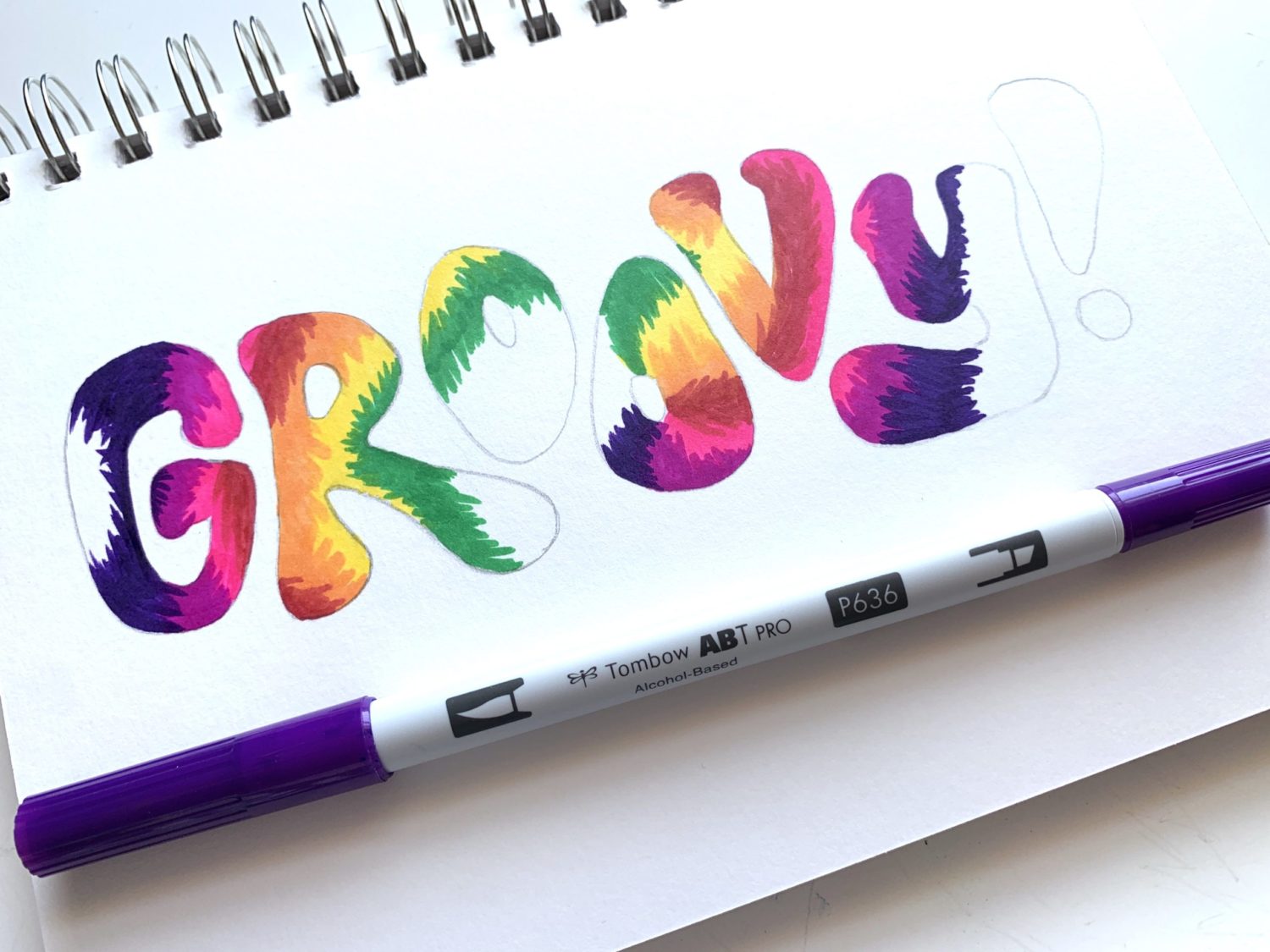 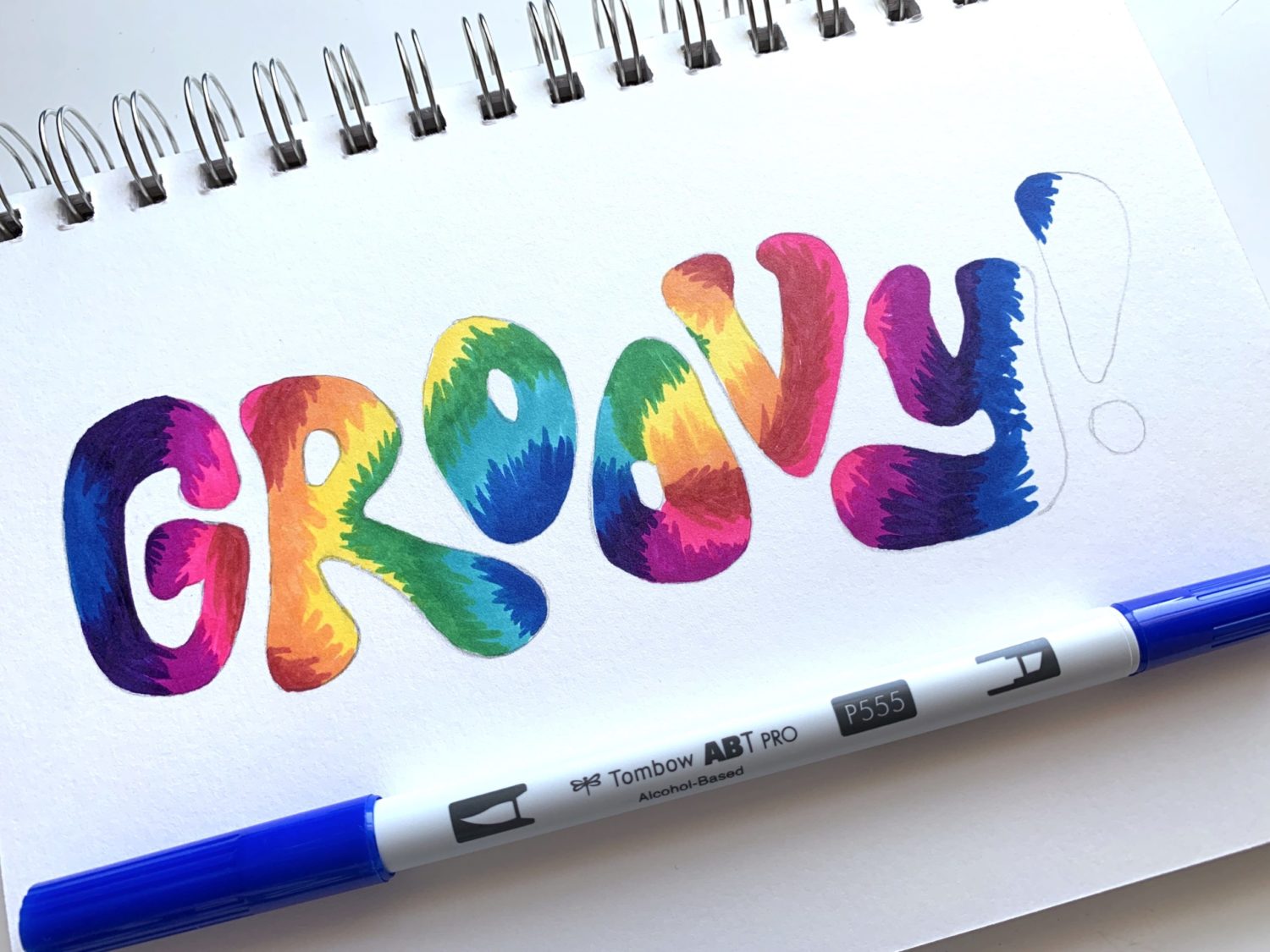 Sometimes it’s necessary to go back with colors and fill in some spaces that didn’t get filled in the first. I used ABT PRO P403 and P245 to fill in the rest of the ‘y’ and the exclamation point. This step looks different depending on the chosen word, style and color choices.

One of the great things about the ABT PRO Markers is being able to layer them to do some extra shading. For this step, I started by coloring over the place where the two blue colors met with ABT PRO P403. It went from looking like this (pay close attention to the blues)… 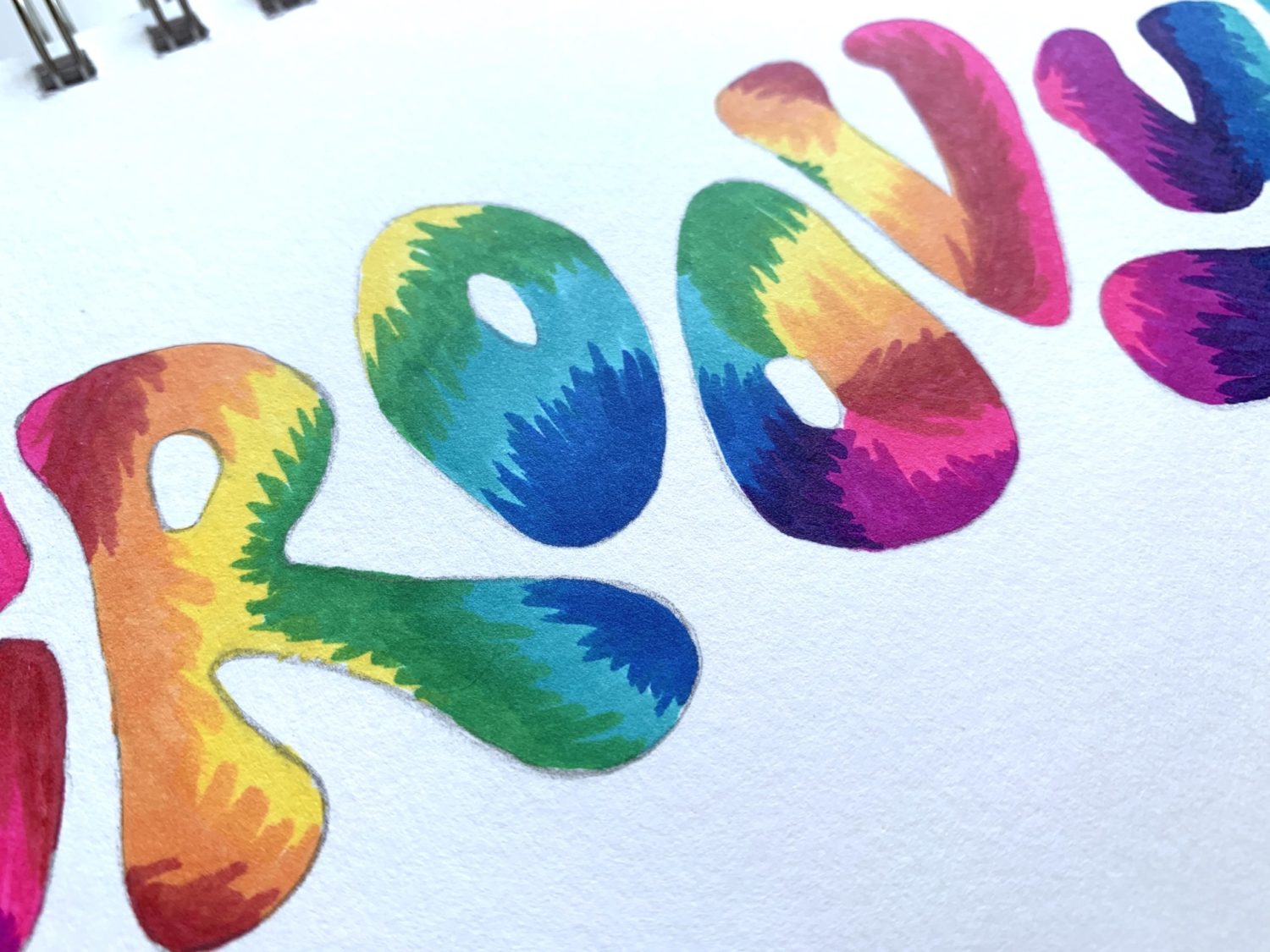 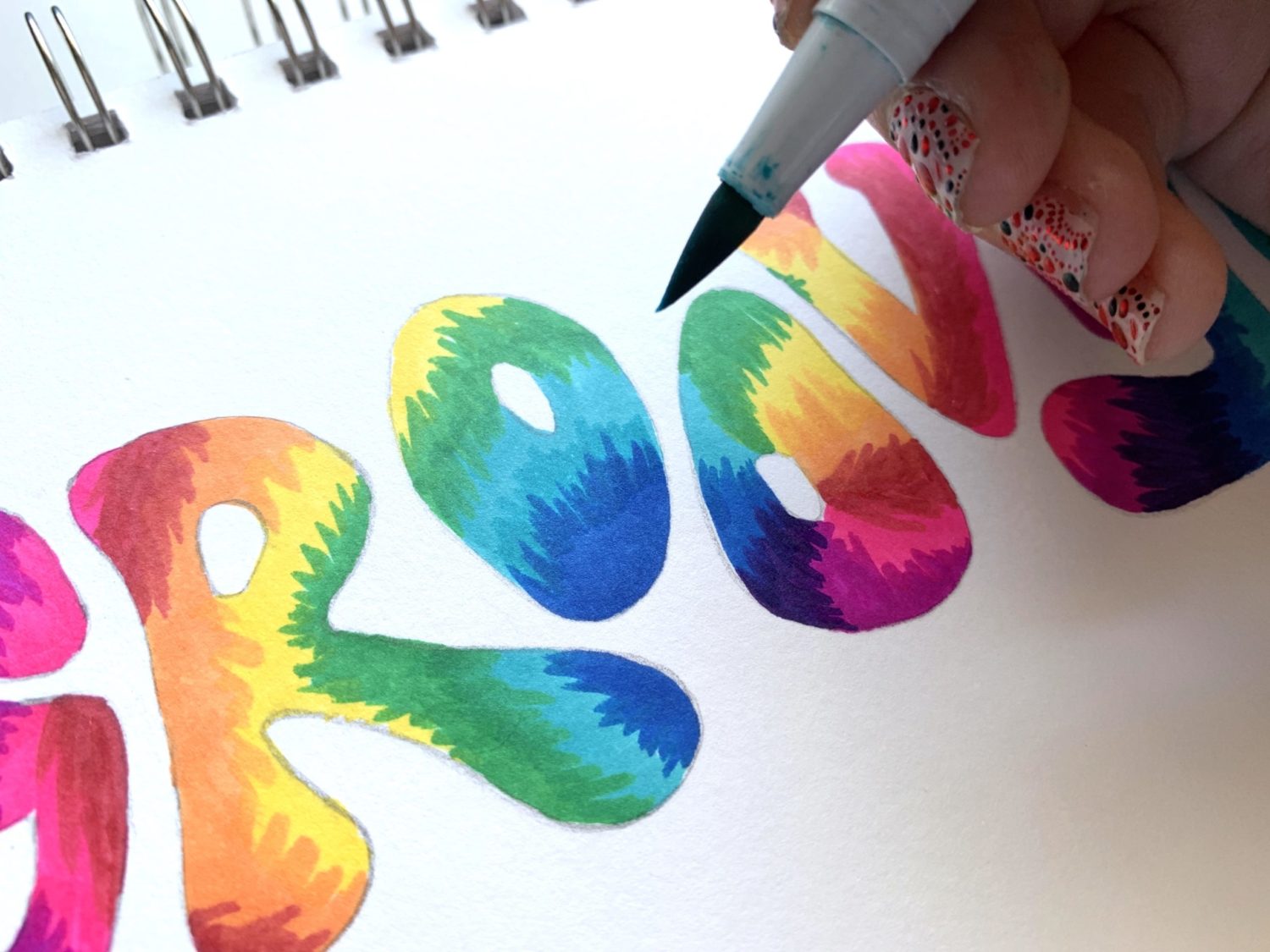 Like I said, adding some simple shading is super easy with the ABT PRO Markers.

I did this to every place where two different colors met. I always took the lighter of the two colors and simply colored right over the two colors. This resulted in so much more depth! 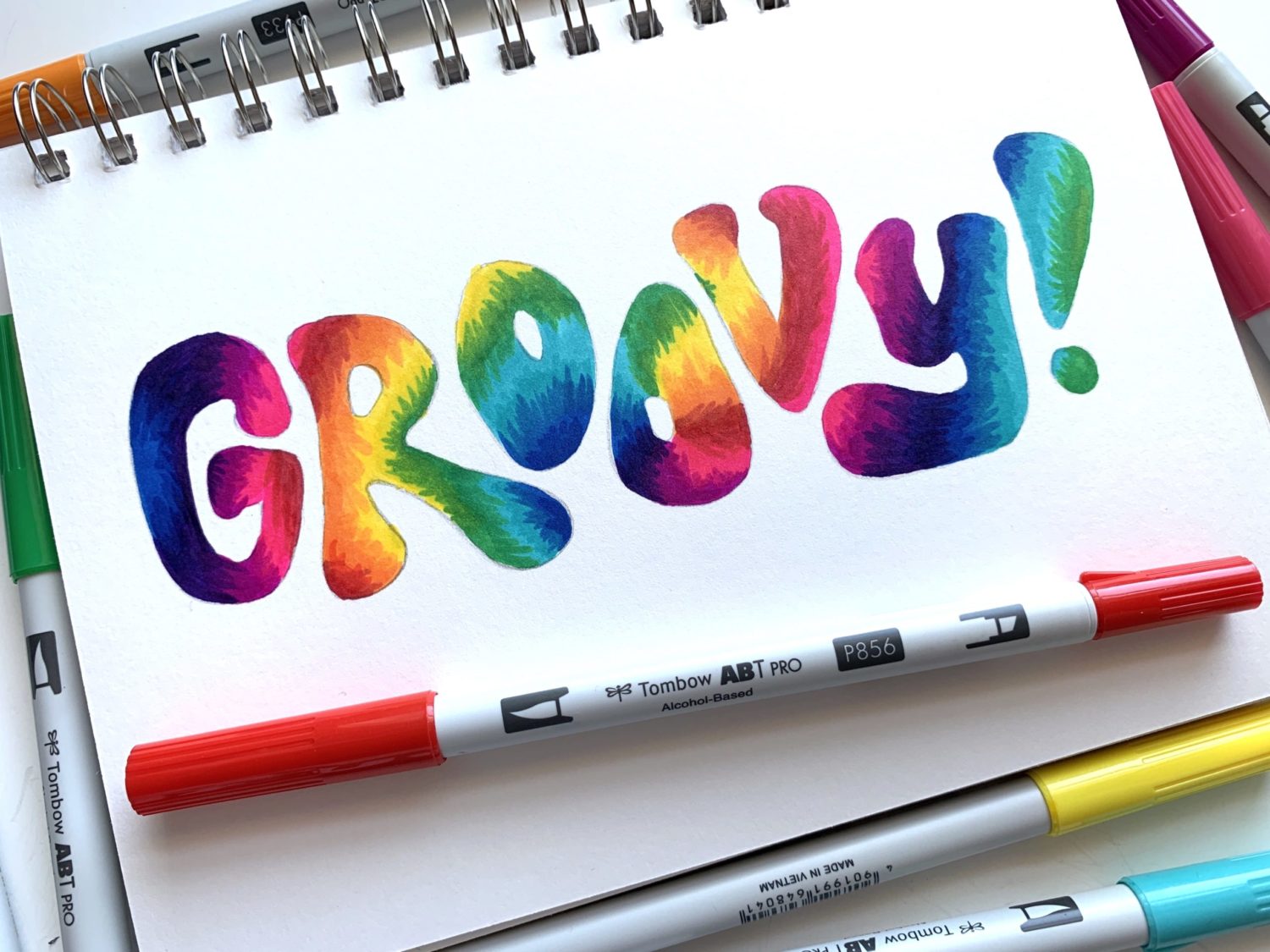 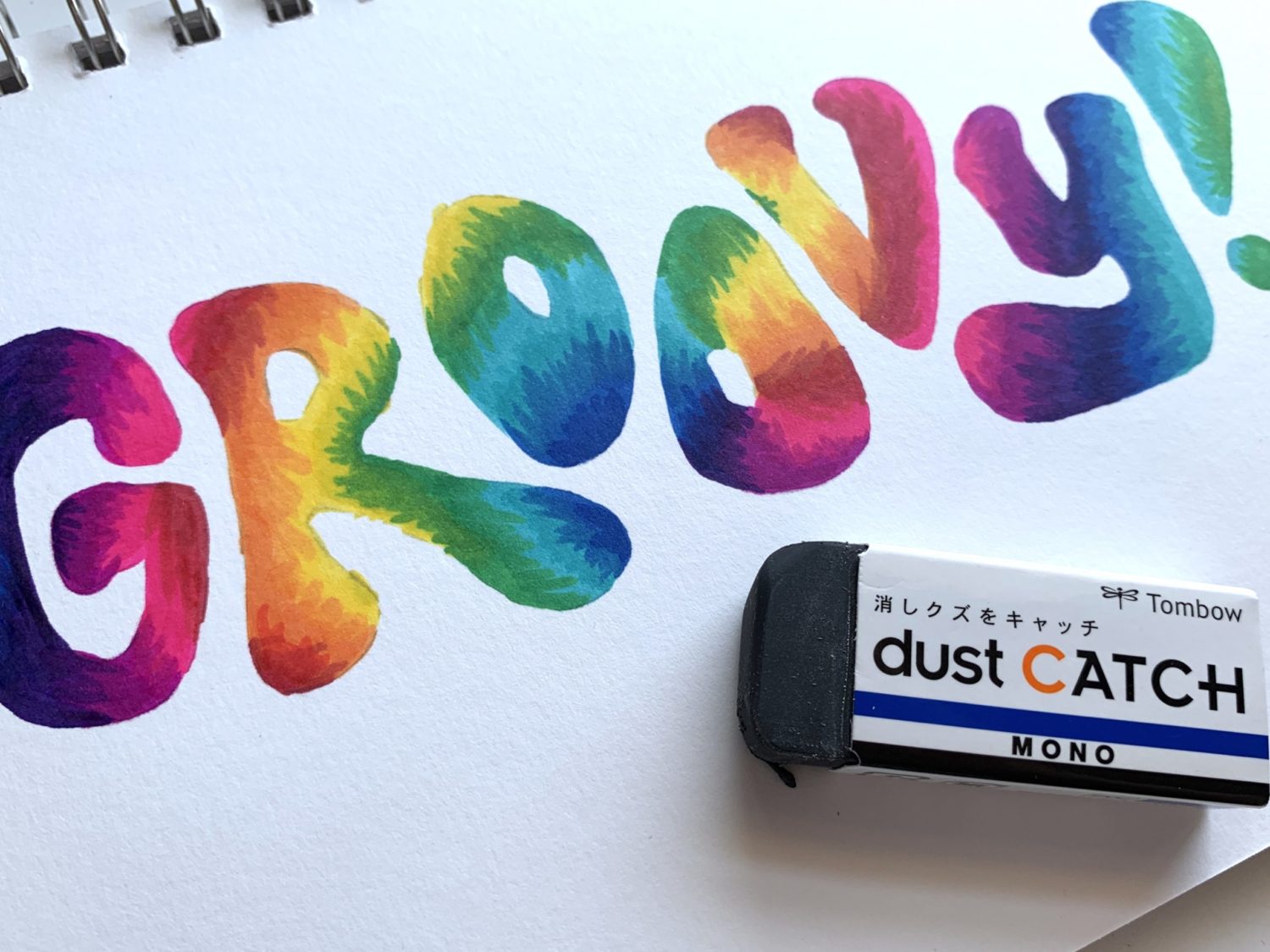 I erased the pencil lines with the MONO Dust Catch Eraser. 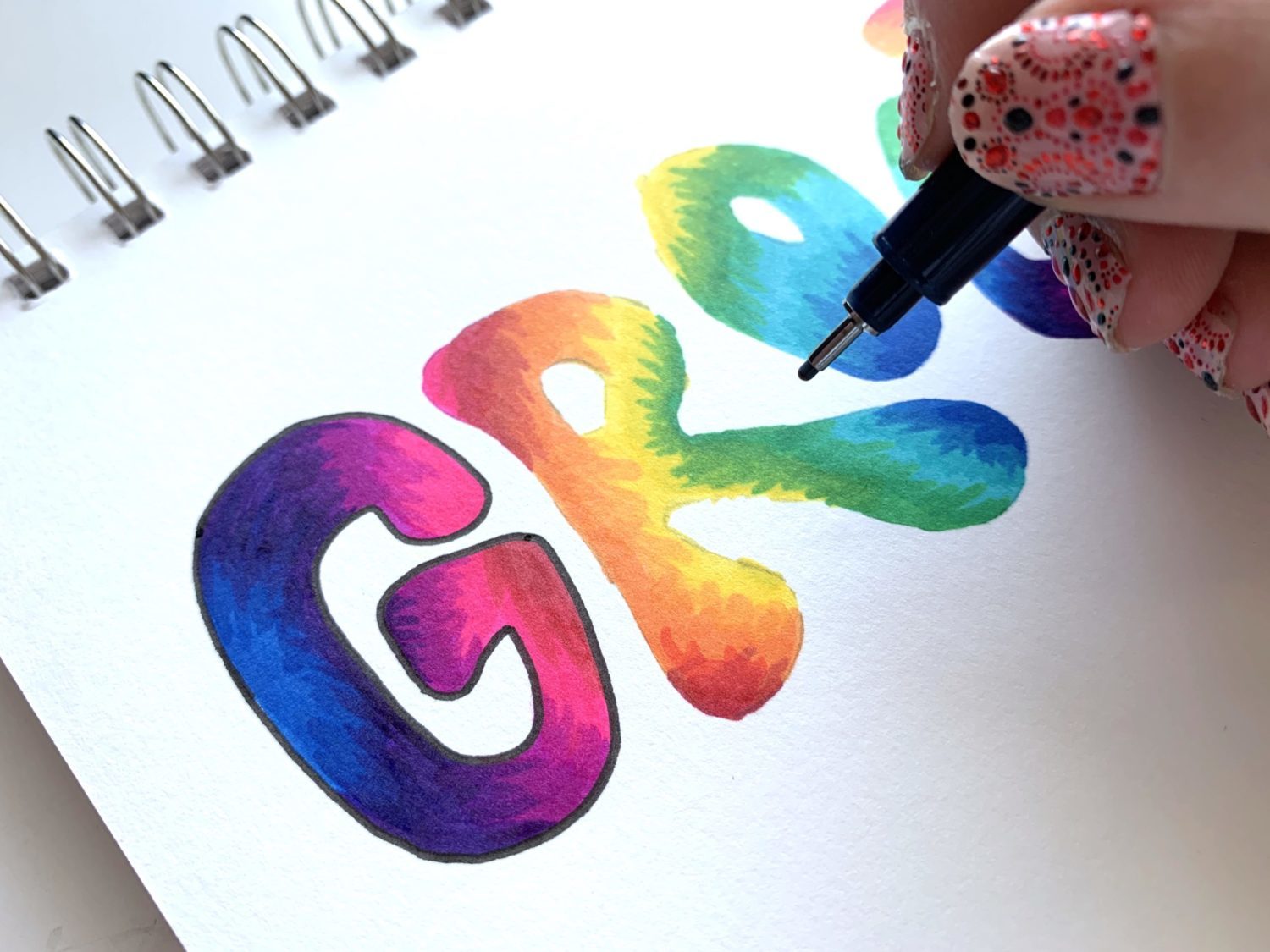 Erasing the pencil lines made all the imperfect edges more visible. I decided to use MONO Drawing Pen 08 to smooth out those imperfections. It was thick enough to give each letter a smooth edge in one line!

That’s. the completed look! It resulted in some very groovy lettering! 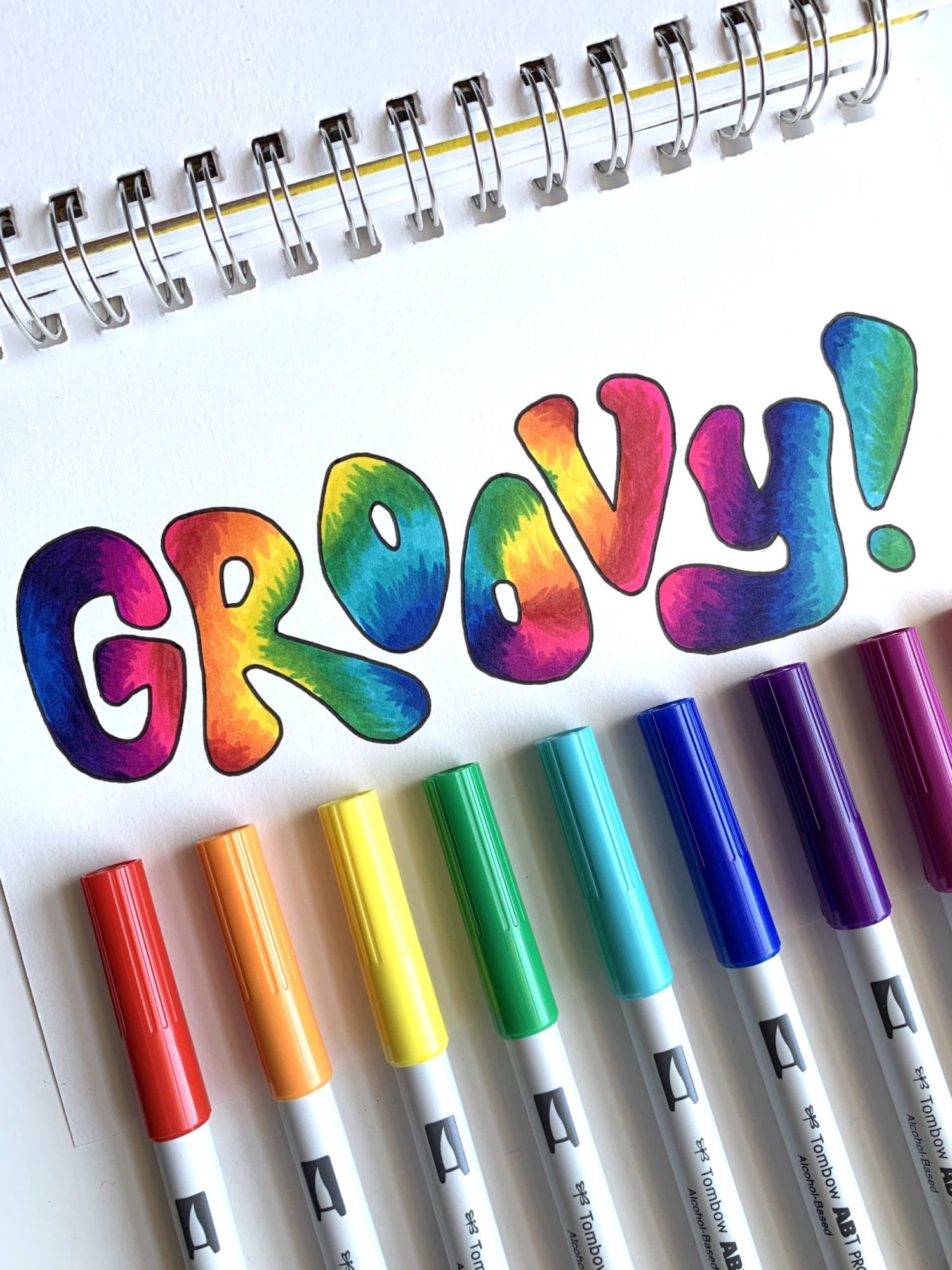 Thanks for following along with this tutorial! I hope the tie-dye colors put you in the summer mood! If you’re interested in trying another fun summer project, check out Summer Popsicle Lettering Tutorial by Adrienne Castleton. You can also check out 3 Lettering Fill Styles With Fudenosuke Neon Brush Pens by Grace Myhre!

Also, if you try one of the projects from the blog, tag us or let us know how it turned out!

3 thoughts on “Tie-Dye Lettering with ABT PRO Markers”