Hello everyone, it’s Ali LePere here! Today, I want to talk to you about hand lettering! To letter in different styles, we have to talk about increasing our visual vocabularies. 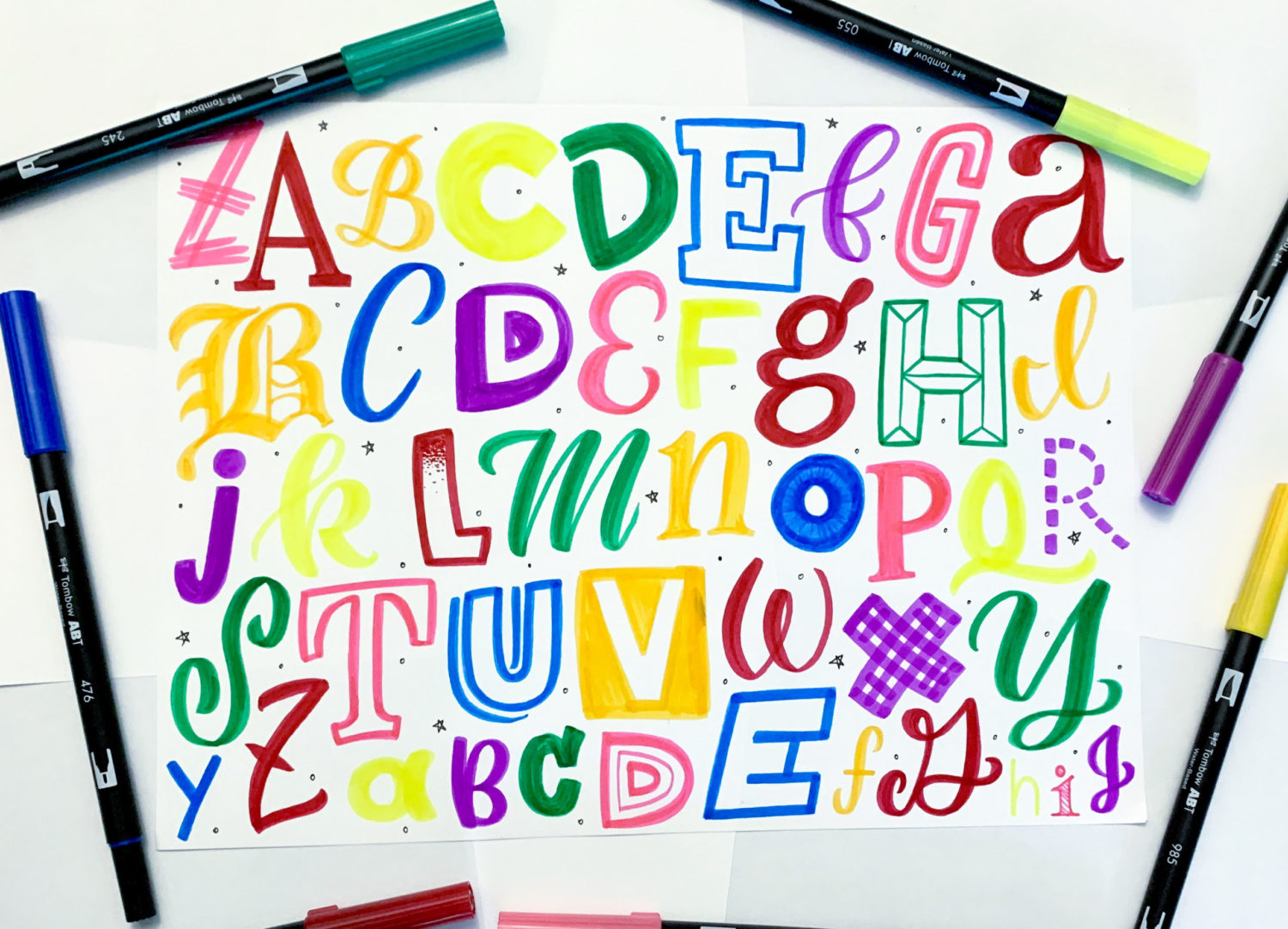 If you want to increase your visual vocabulary, follow along with this guide. I’m going to walk you through some basic ways to draw letters and also share how I practice lettering! 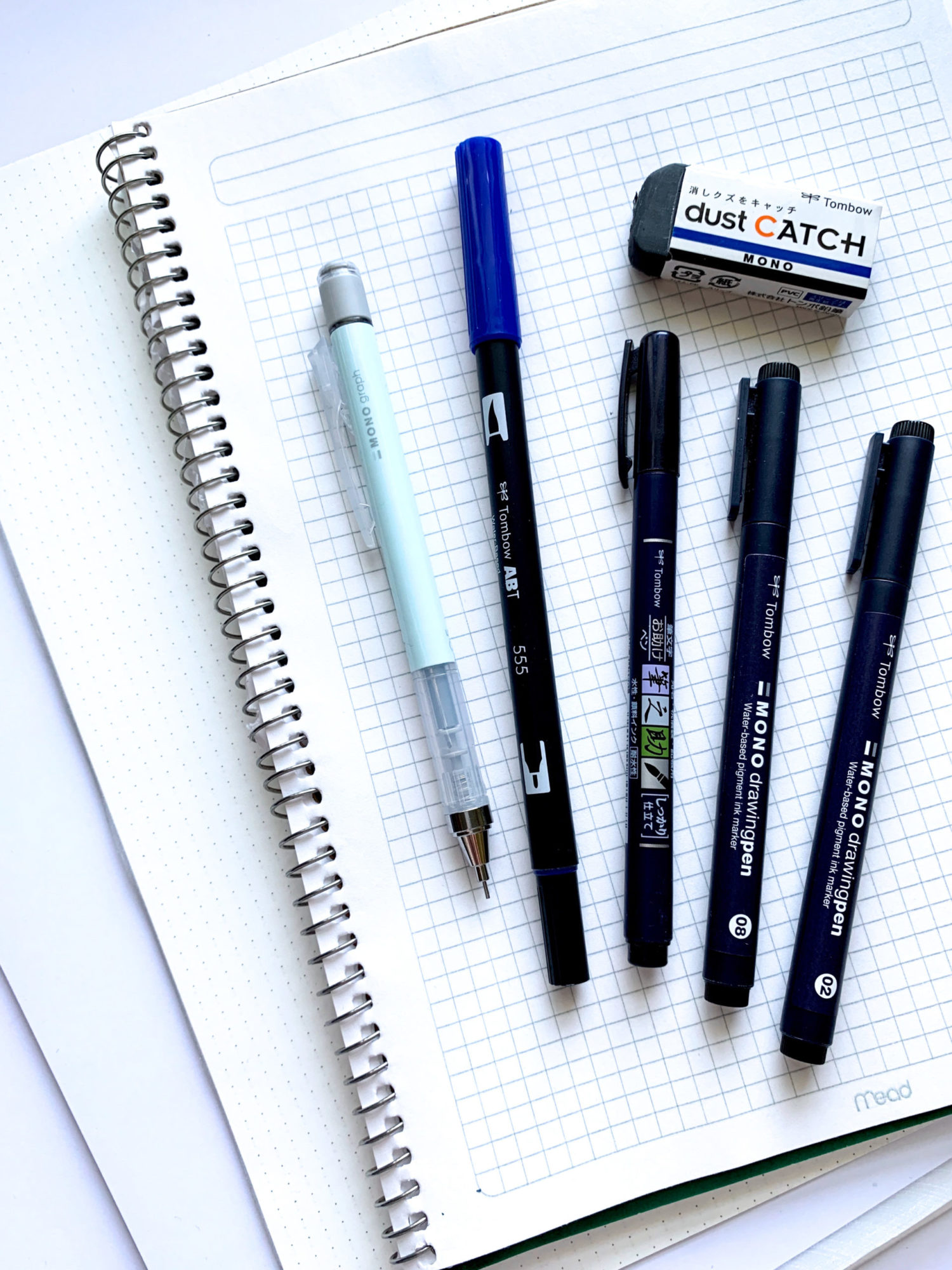 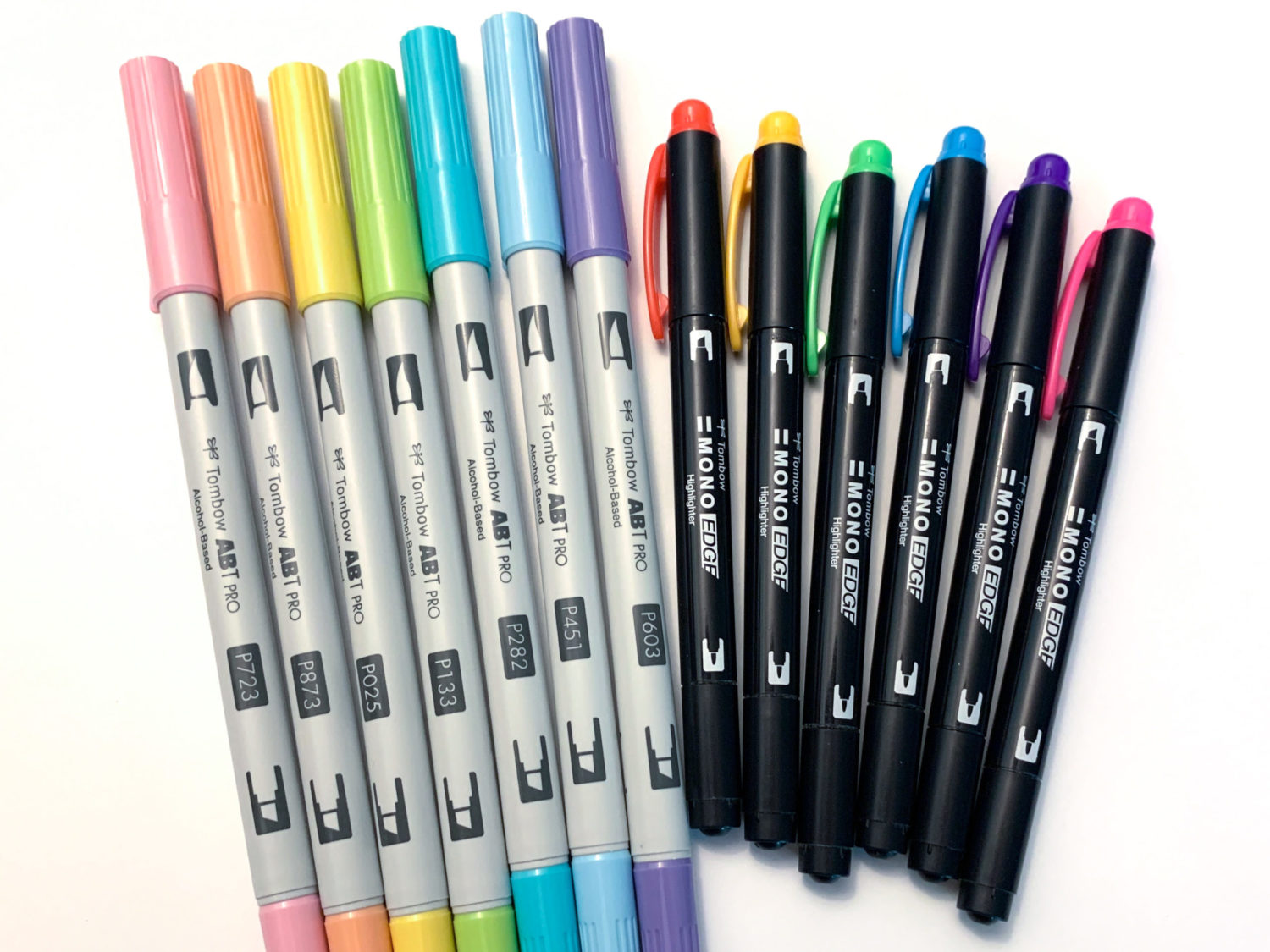 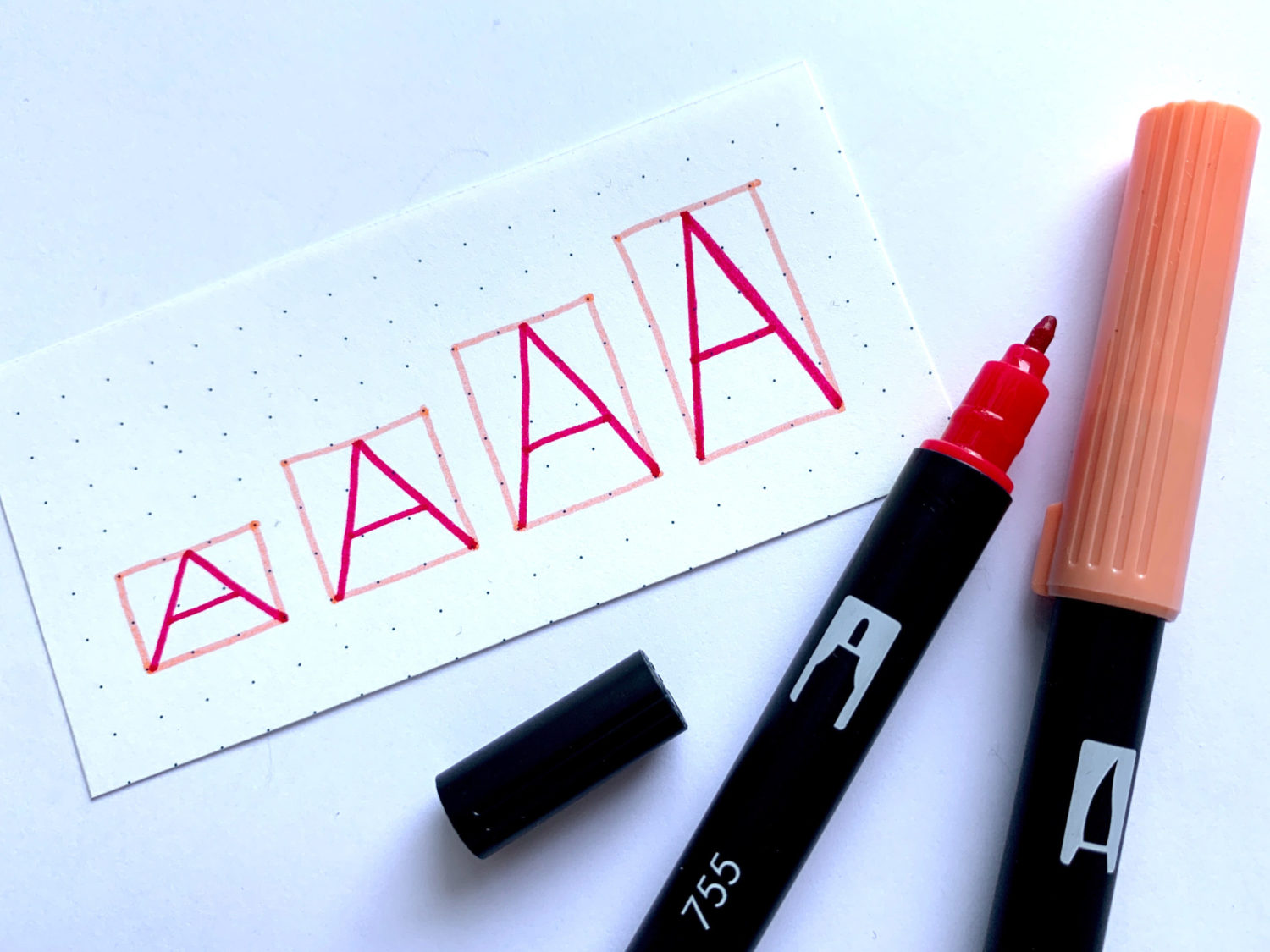 Adjusting the height and width of letters is often necessary when creating a lettering composition. An easy way to practice this is to start by drawing different sized boxes on graph paper or dot grid paper. Then, pick a letter you want to practice and draw it inside each box. In these examples, I used the bullet end of two different colored Dual Brush Pens. 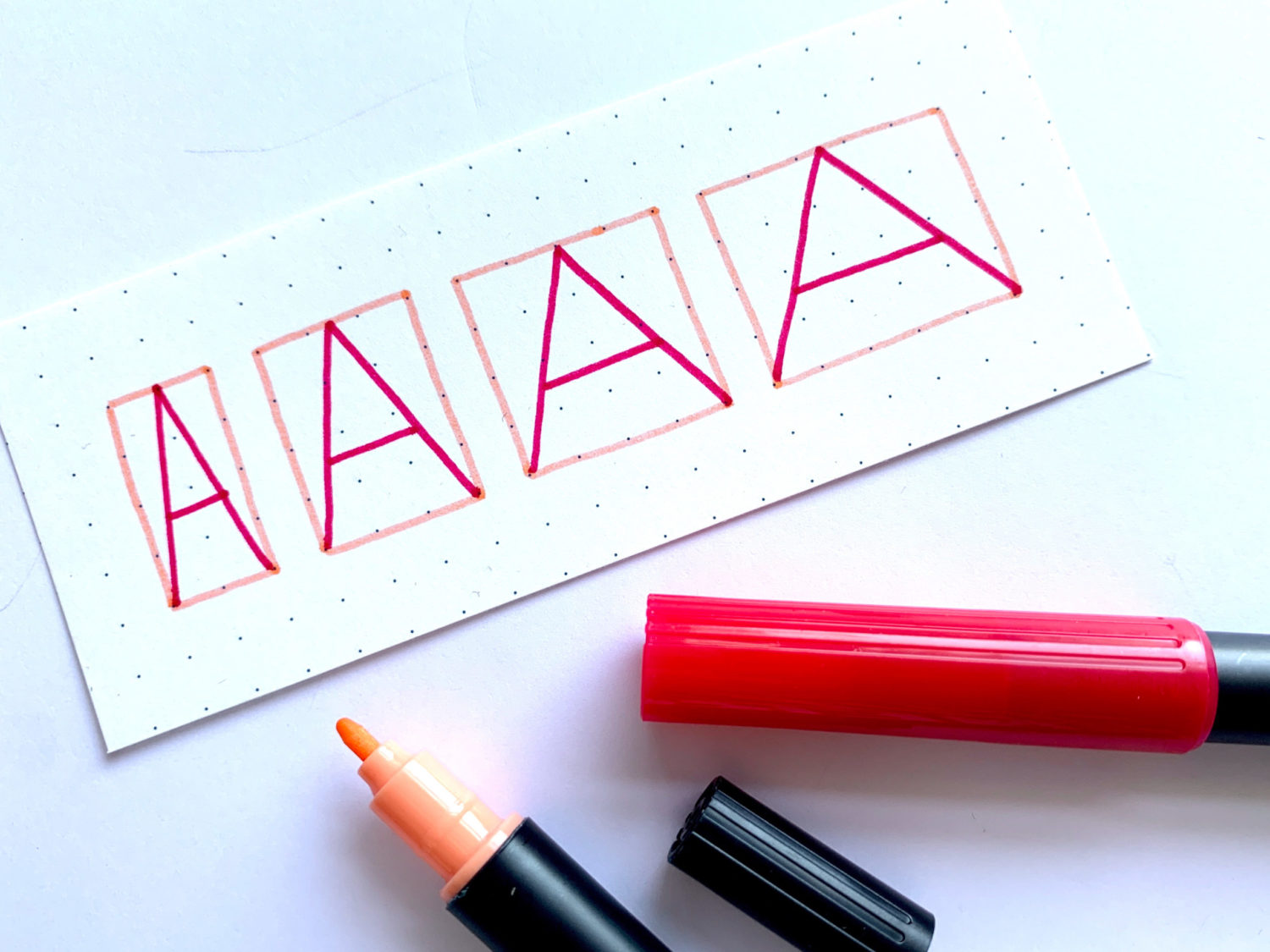 Seeing how different letters look at different heights and widths is important in developing your visual vocabulary. You’ll quickly learn which letters look good and not so good when they’re squeezed into the confines of a box. Below you can see how these kinds of simple adjustments can make a word more visually exciting! 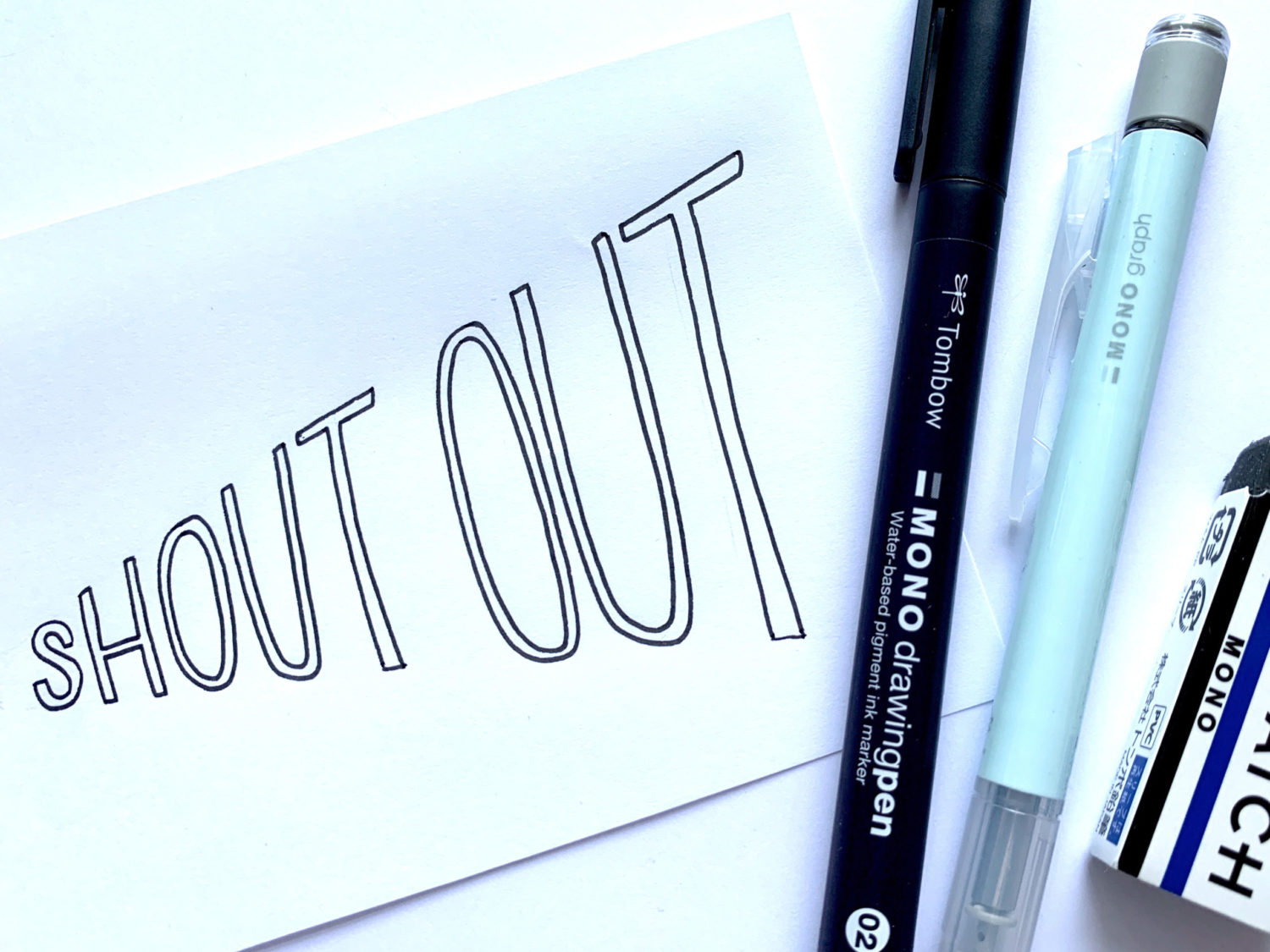 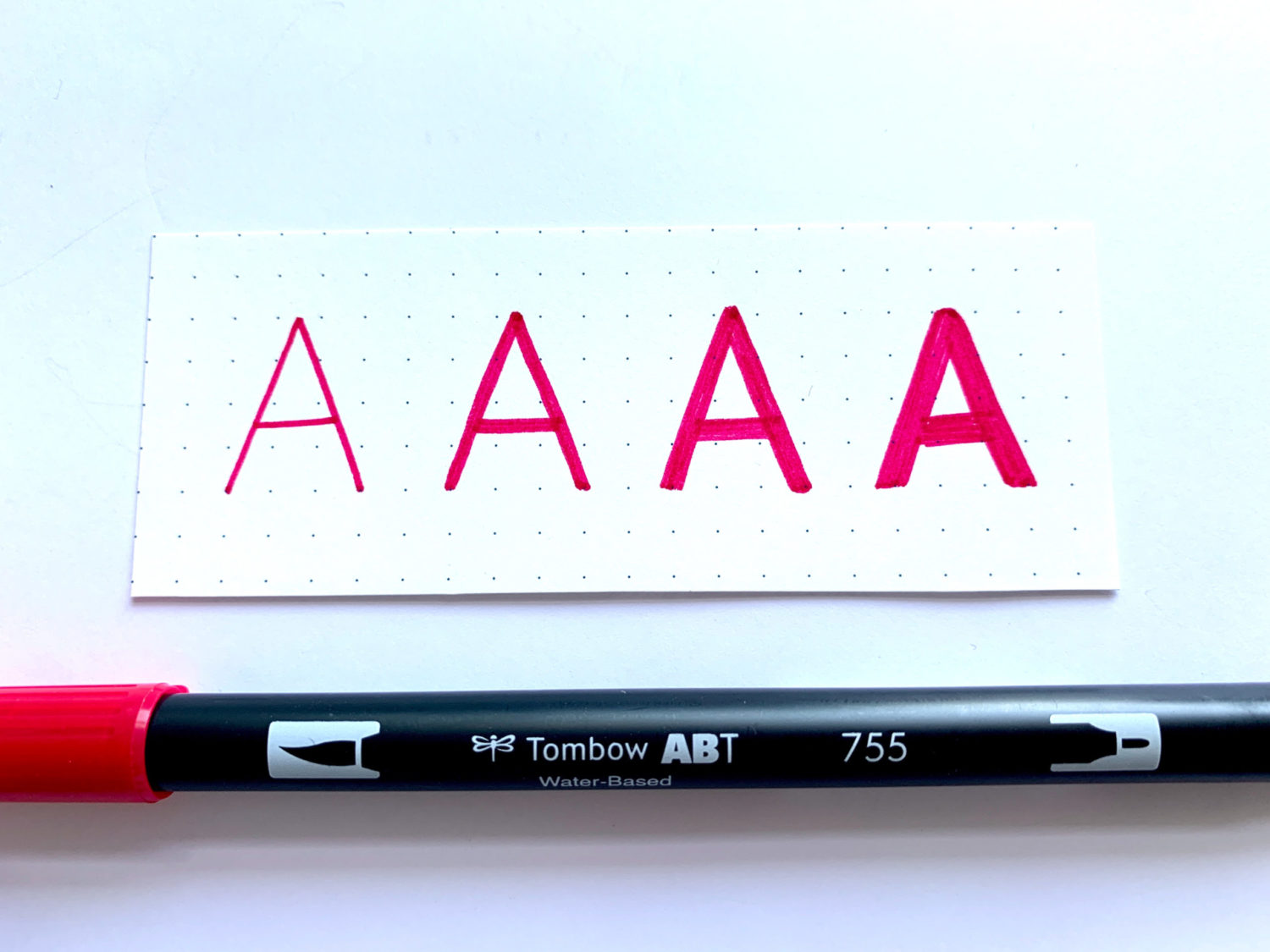 In calligraphy, the tool I draw with and the pressure I apply is how I change the weight of the strokes in a letter. Unlike lettering, where it’s more about drawing each letter, calligraphy is about learning the right movements with the right tools. Upstrokes should be applied with light pressure, resulting in a thin line. Downstrokes should be applied with heavy pressure, resulting in a thick line. I used the Fudenosuke Brush Pen and the brush end of Dual Brush Pen N15 in this example. 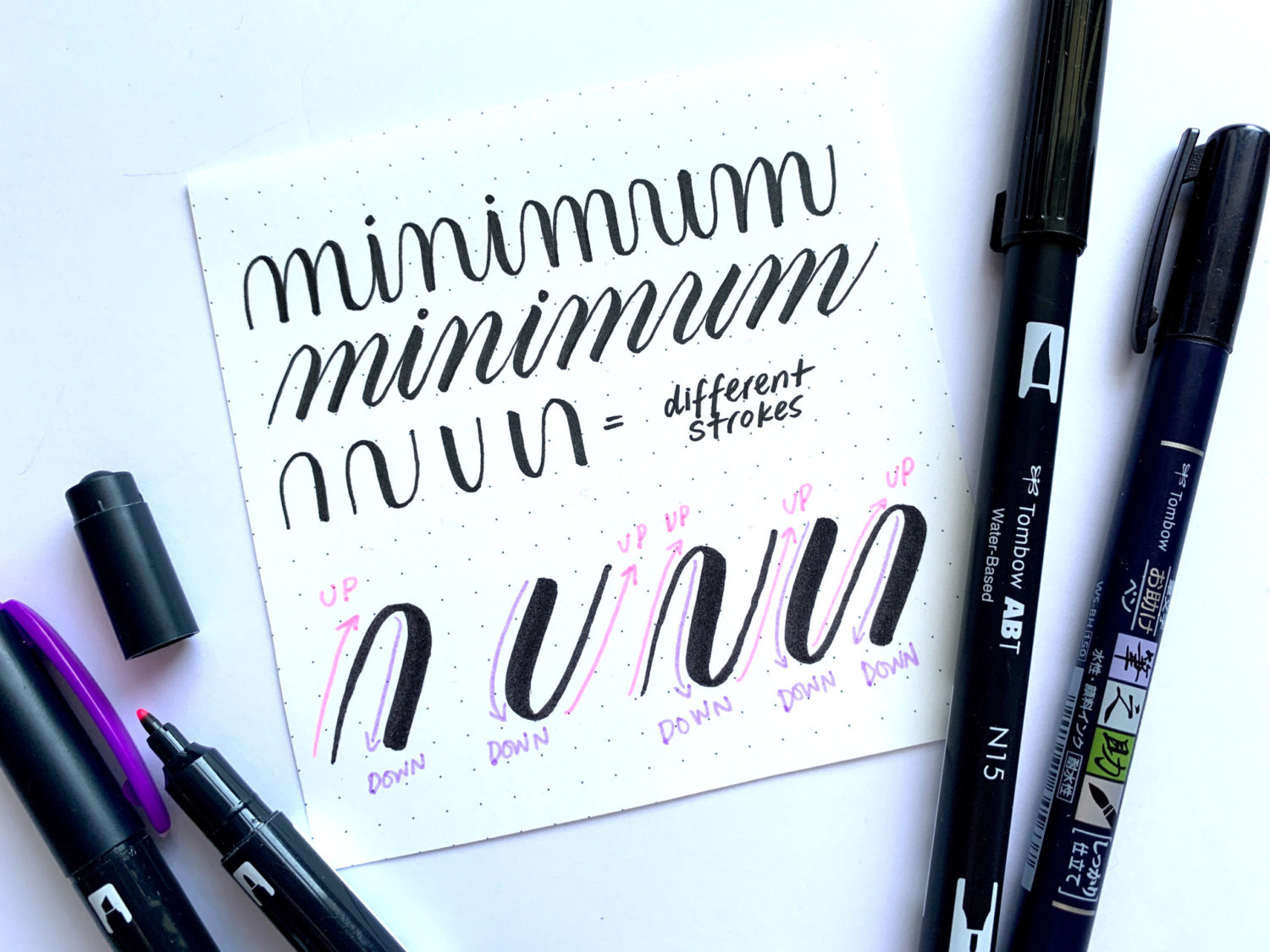 While the letters in a typeface look different from those drawn by a calligrapher, the letters are still made up of strokes. If I add extra weight to a part of the letter that should be lighter, it looks all wrong. This is an area of lettering where it would help to have a font printed out as a reference for when you practice. 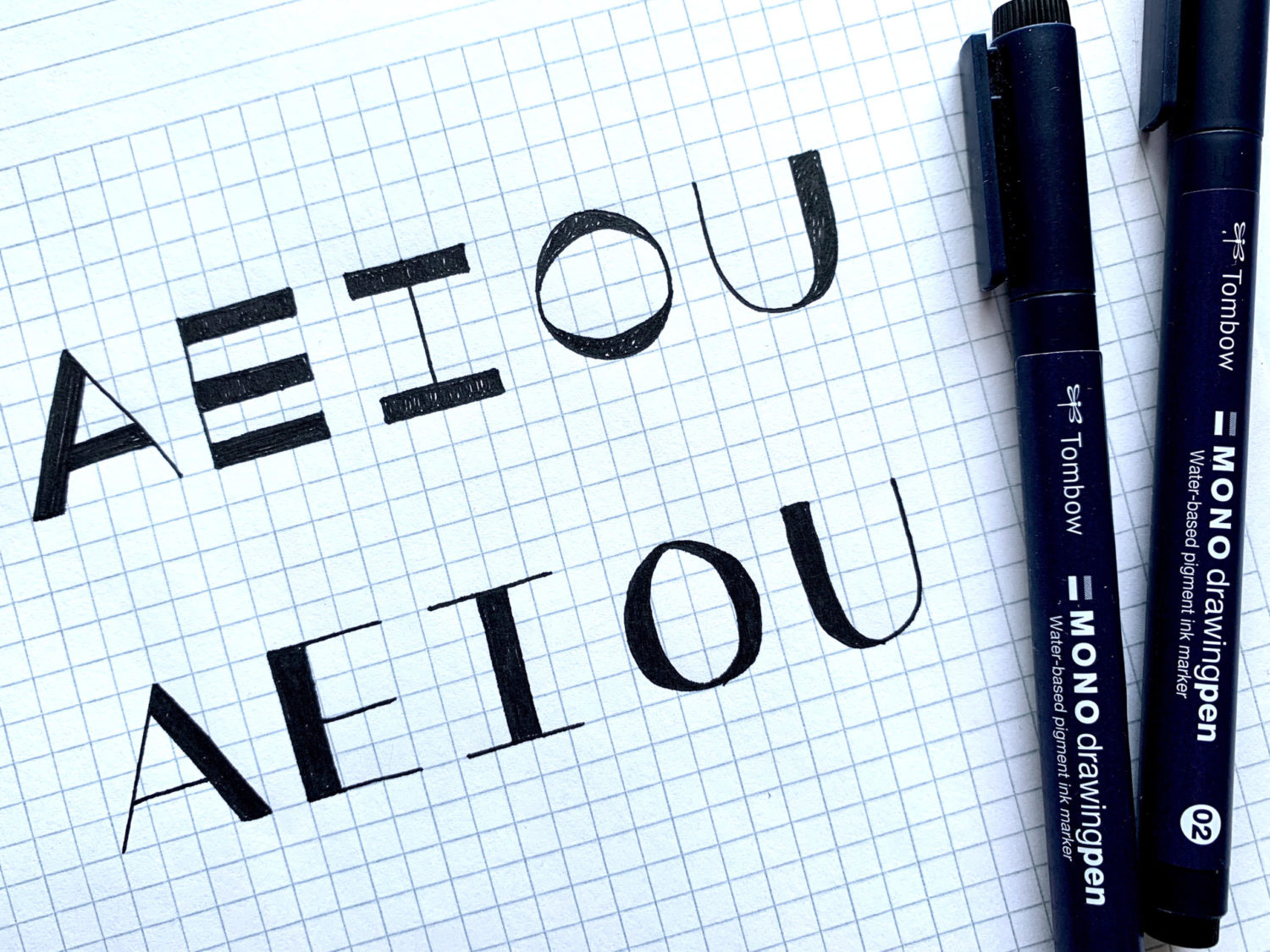 Most of my own hand lettering pieces are made up of uppercase letters. This isn’t because I’m YELLING! It’s simply because they are easier to work with. Without realizing it, our brains try to see the overall shape of a lettering composition. Since uppercase letters are all the same height, it’s easier to make shapes with them. Lowercase letters vary greatly in height. Compositions with a lot of them often look misshapen or full of holes. 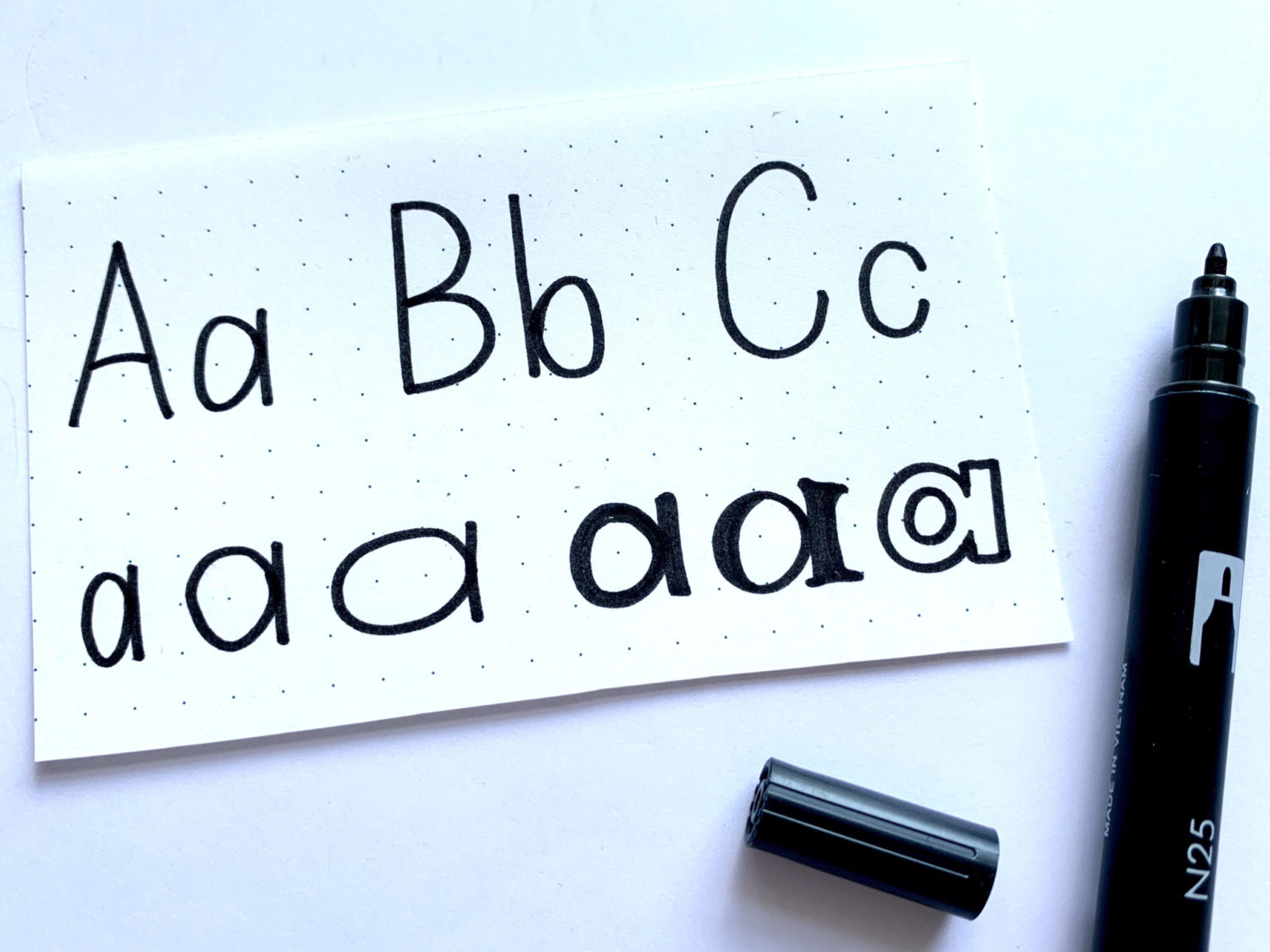 To show the difference between a composition made up of uppercase and lowercase letters, I lettered the phrase “chill out” twice with the MONO Graph Mechanical Pencil. I inked over the pencil with MONO Drawing Pen 02 and erased the underlying pencil markings with the MONO Dust Catch Eraser. Then, I drew a box around the lettering using the MONO Edge Highlighter in purple. I shaded in the areas where there was remaining space. You can see how much more dead space there is in the lowercase example. 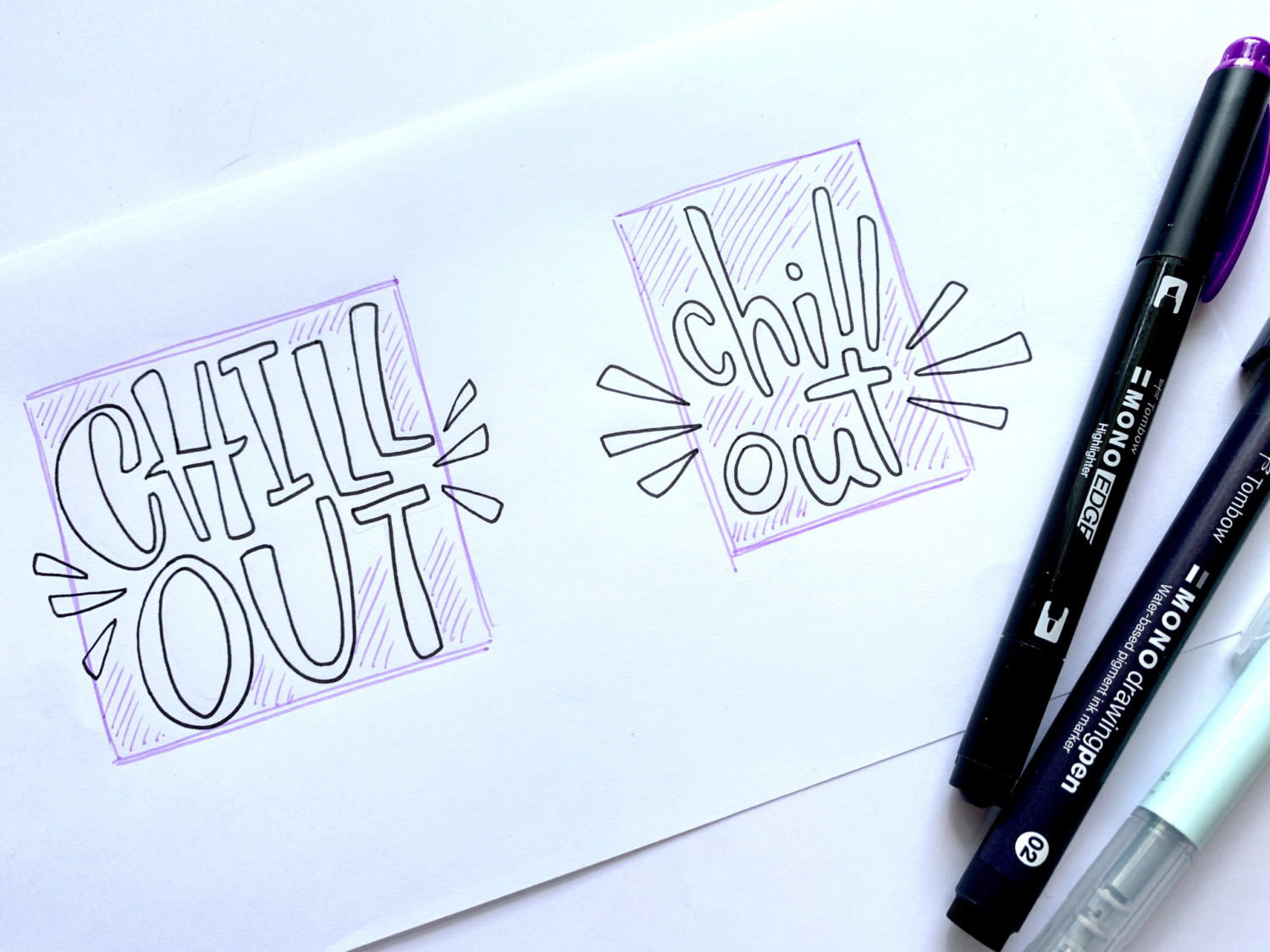 So far, I haven’t shown any examples of lettering with serifs. Simply put, serifs are those little strokes that stick out of larger strokes on a letter. That sounds strange, but you have seen serifs in famous typefaces like Times New Roman and Garamond. In the example below, I used Dual Brush Pen 555 to draw the letter T in three different ways. On the far left is an example of a sans serif letter or a “without serif” letter. In the center and to the right are examples of serif letters. 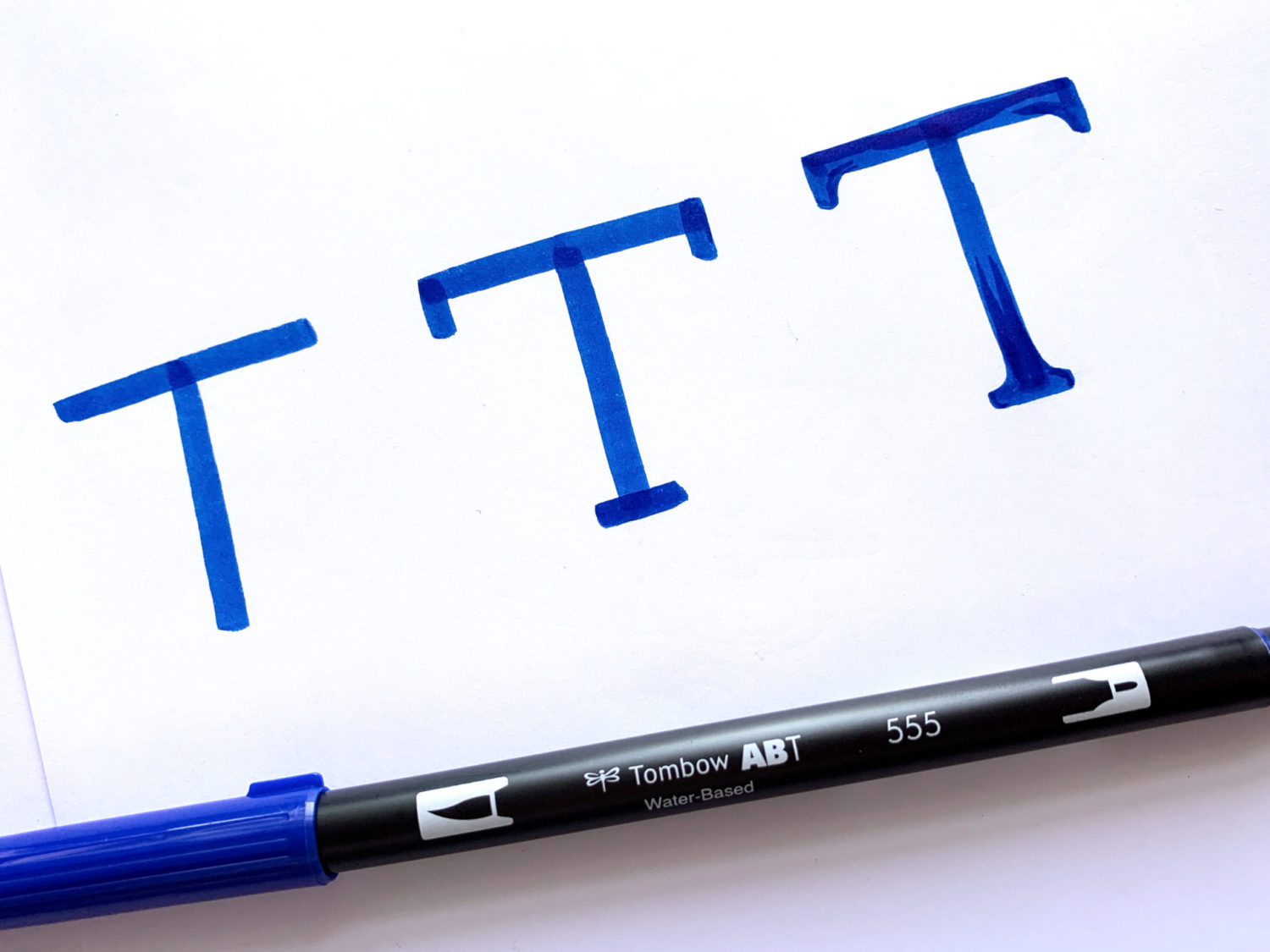 There are many different varieties of serifs and they’re a great way to add style to lettering. Just by adding serifs, I can create a mood for a lettering piece! 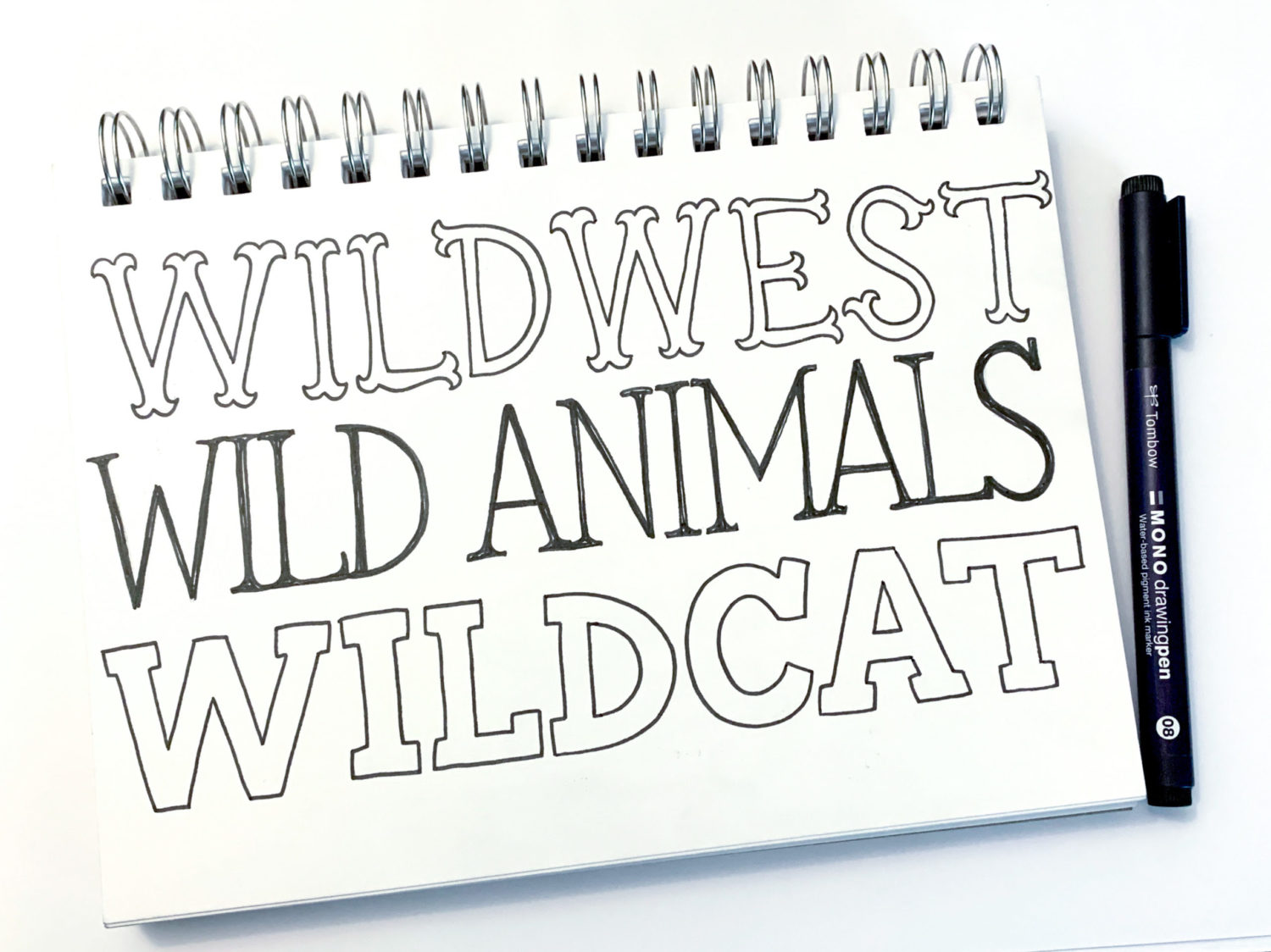 As I mentioned earlier, lettering is essentially a form of illustrating. Once you’ve become familiar with the structure and shape of each letter, you’re ready to start playing. When it comes to decorative lettering, the possibilities are endless. This is the most playful and fun way to make letters, but it’s also the way that takes the most work. Below you can see a few different examples of decorative lettering. Whether you add slime, a pattern, dimension or alter some brush calligraphy, you’re making decorative lettering! 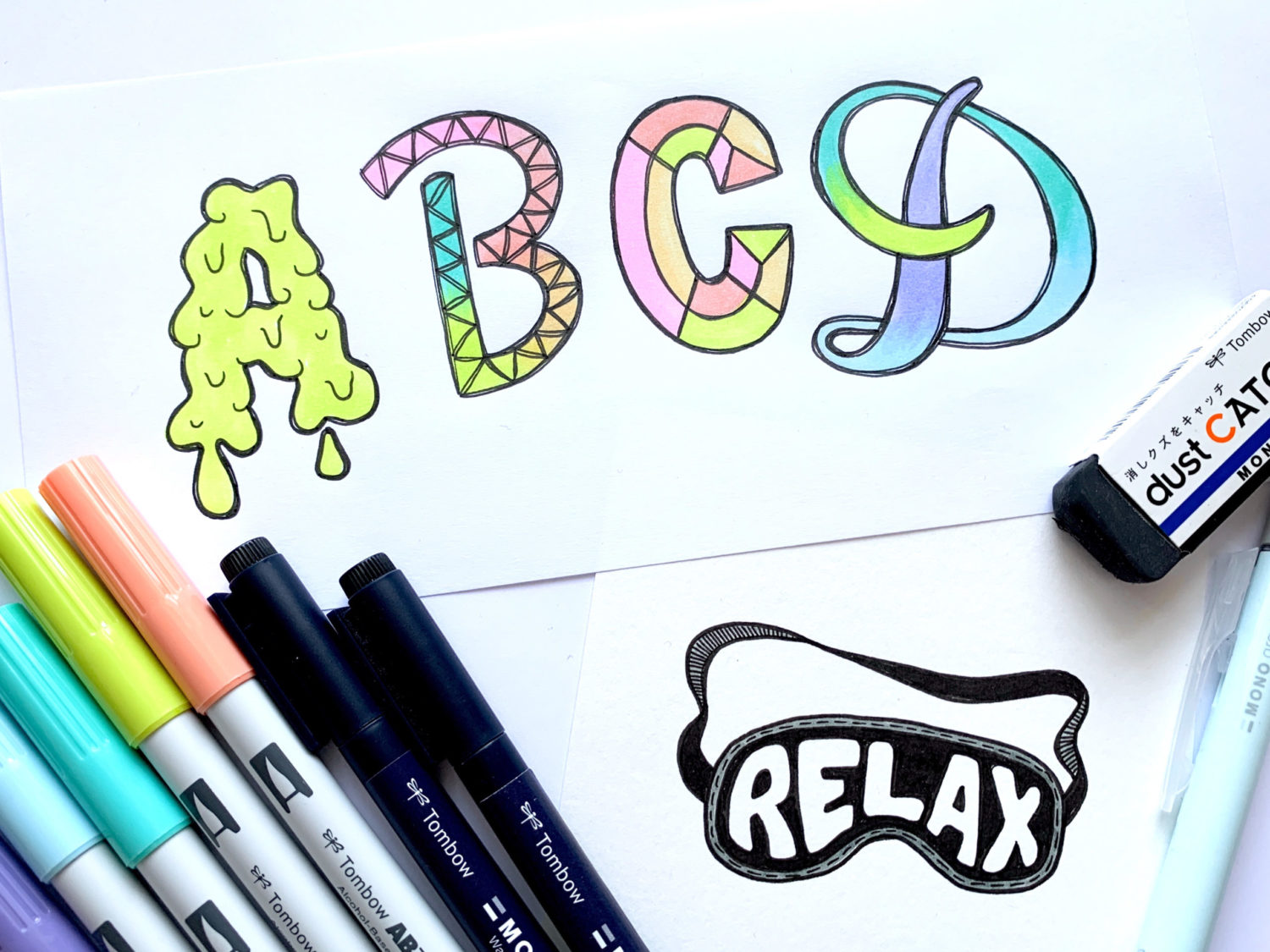 You’re able to tell what each letter is despite them all being different styles. The reason for this is that each letter has a foundation. Do you know what the brilliant part about hand lettering as an art form is? Almost everyone who has learned how to read and write has been partially educated in this art form. If you can read this, you already know what letters are supposed to look like. If you’re able to write, you already know how letters are formed. Since you have pre-existing knowledge about letters, you’re well on your way to becoming a lettering artist!

There are three ways I suggest practicing in order to train your brain to come up with different lettering styles. The first way is to print off references of letters and try to recreate what you see. I recommend starting with basic fonts. This isn’t the fun and flashy way to practice, but it’s the best way to learn the rules! Using Dual Brush Pens is a great way to make this method of practicing more exciting! 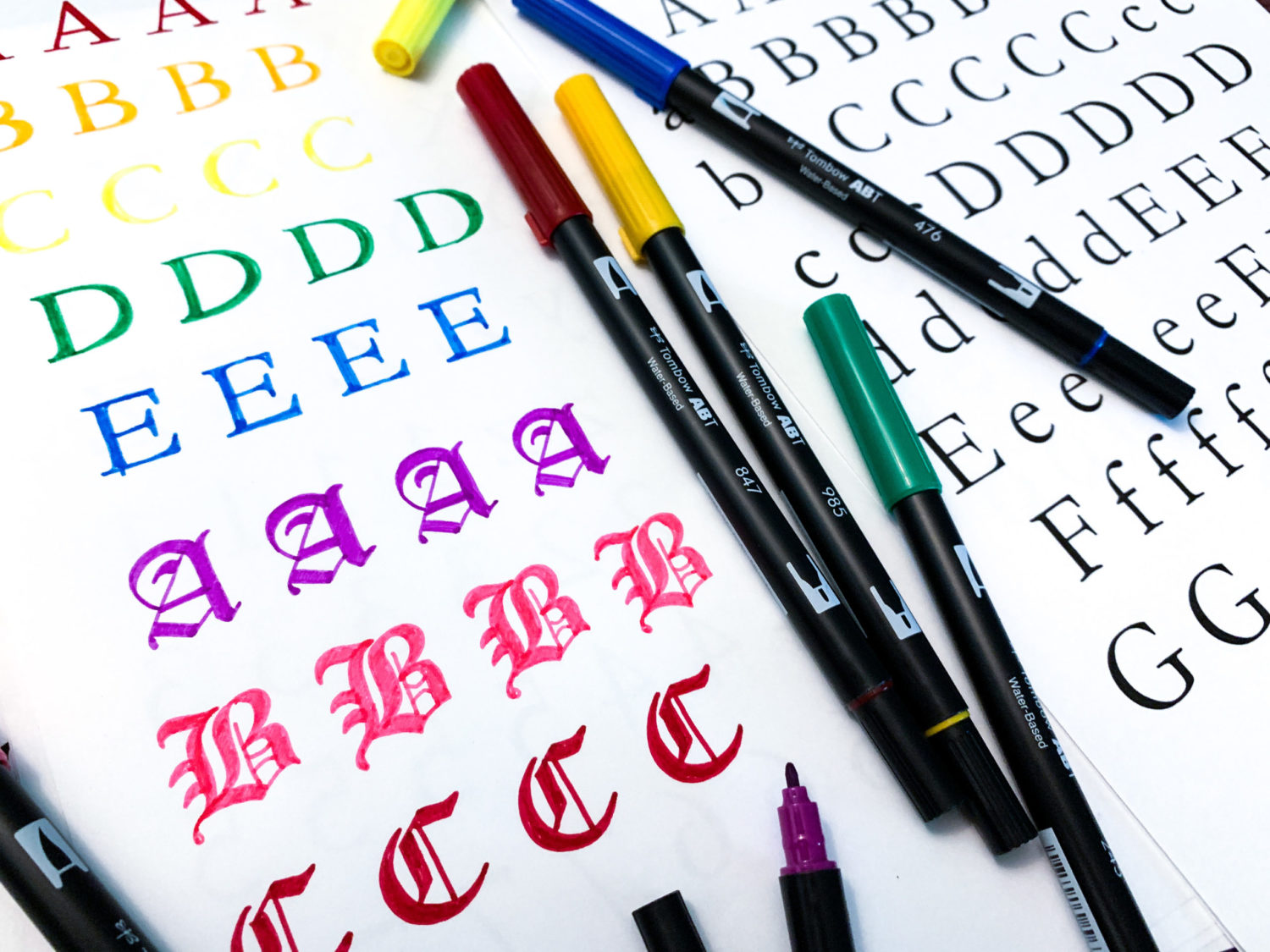 The second way to practice is to choose a single letter and draw it as many ways as you can. Start by trying to come up with different styles without using references. See what your brain can come up with. Then, start looking for sources of inspiration and try drawing like other lettering artists. Try doing this with all the letters of the alphabet! (Always remember to credit the artist you’re imitating if you’re posting your work!) 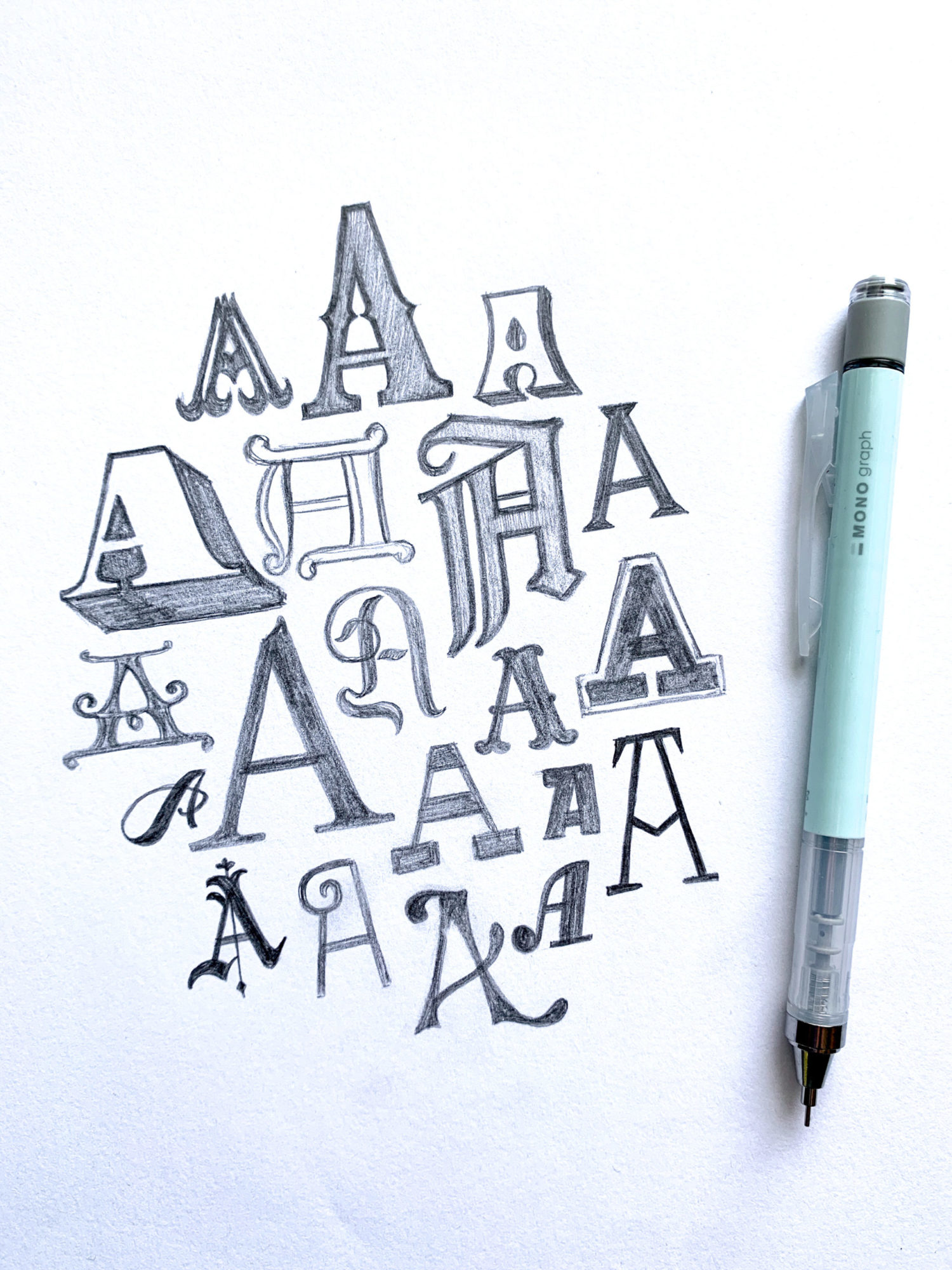 The third way to practice is to fill up a page in your sketchbook or art journal with the alphabet. Go in alphabetical order, trying not to repeat the same style. The more you do exercises like this, the more you train your brain to come up with different lettering styles! 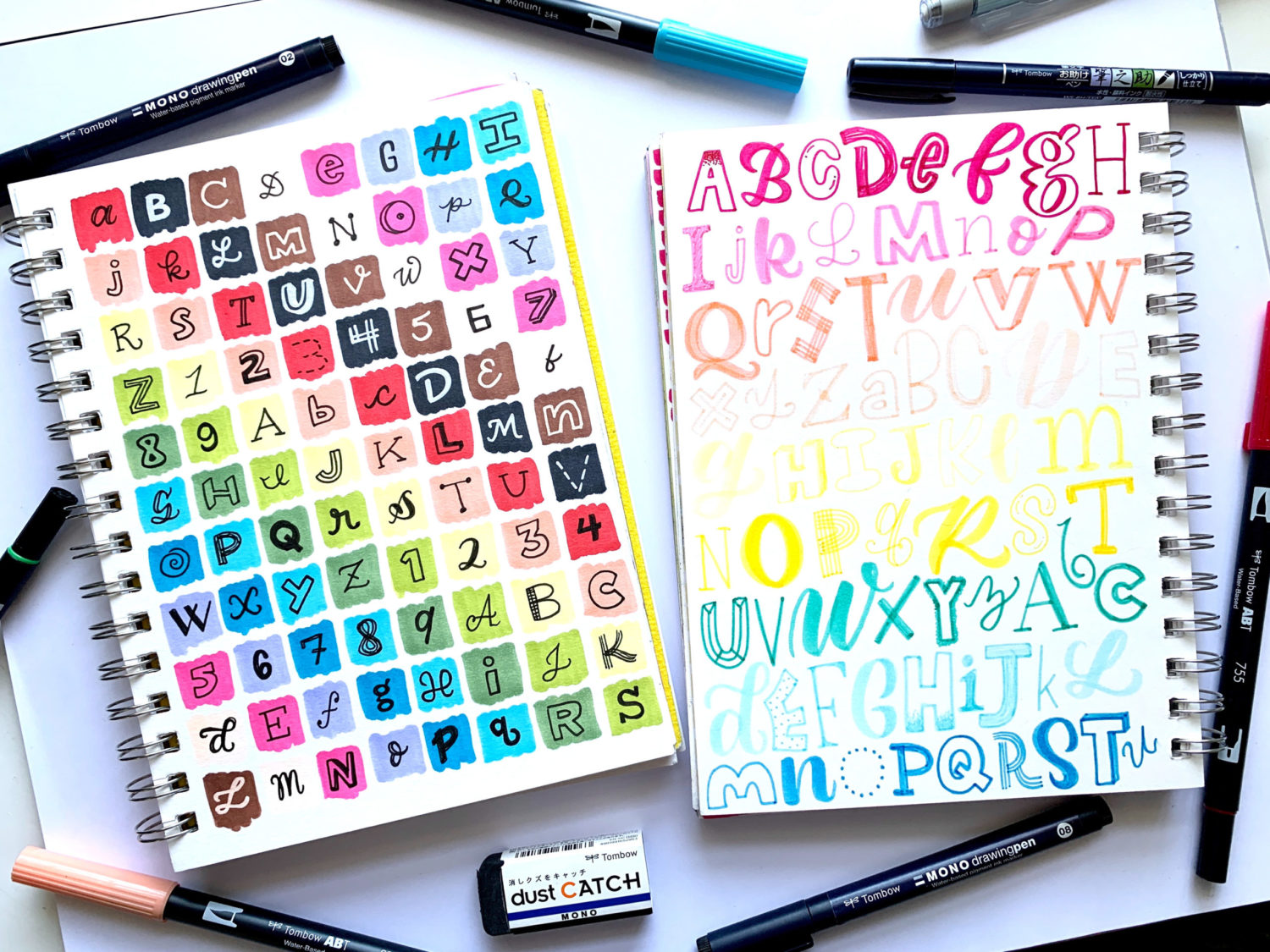 Thank you for stopping by and learning to letter with me. I hope that you learned something new! If you’re interested in learning more about hand lettering, I suggest you check out the 5 P’s of Brush Calligraphy and Hand Lettering by Grace Myhre! 3 Tips for Purposeful Lettering Practice by Lauren Fitzmaurice is also a good resource! Make sure to tag Tombow when you post your lettering projects so we can cheer you on. Now go practice!

4 thoughts on “A Practical Guide to Lettering in Different Styles”